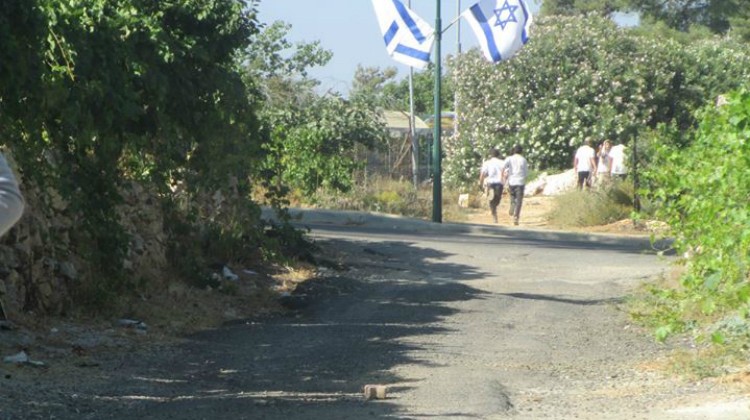 I live in an area called Khallet al-Ballutah. Six families live here, we’re part of a Palestinian community that includes four areas that are an enclave inside the Etzion Bloc area. Khallet al-Ballutah is west of the settlement Alon Shvut, by the tree called “the lonely tree”.

Usually our relationship with the settlers is good. Before the second intifada we used to invite each other to family weddings. We don’t have clashes with settlers on a daily basis, although I did in the past.

In 2007 my two daughters were attacked by settlers at the Etzion Bloc roundabout in the presence of soldiers. The soldiers detained the settlers, the police served an indictment against the settlers and there was a trial. I was summoned to testify, although I wasn’t present during the attack. The girls were not summoned. Their testimony at the police was enough.

Two years ago, my house was attacked by about thirty settlers throwing rocks. I called the police – no response. By chance, another settler from Har Etzion Yeshiva passed and saw what was happening and called the police, and within two minutes soldiers and police officers arrived. I filed a complaint with the assistance of Yesh Din. It was only four months later that I was summoned to the police and an officer asked whether I wanted to pursue the complaint. I realized that they weren’t treating this seriously and I gave up.

During this last incident, my daughter was attacked.

At around 4:30 pm I went outside by myself to the patio just outside the house. I saw seven settlers on the patio, aged 18-20.

One of them stood outside the patio and when I came out, he stood behind me and said, “Go away.” I said, “You leave, not me.” I realized he meant to count to three and then he didn’t want to see me. There was another guy on our patio who stood in front of me (the first one was behind me) in a threatening way. He gestured with his hand as though to slap me, I moved his hand away with mine and then he slapped me and kicked my leg.

The settler who was outside pushed me towards the table on the patio, and at that point the settlers got up as though they wanted to assault me. I picked up a rock that was on the patio. When they saw that, they all got up and ran away and began throwing rocks at the house from about six meters away. A large rock hit my leg, it hurt, but I didn’t need treatment.

At some point, the neighbors came outside, there was a commotion, and when the settlers saw that a large group of Palestinians had gathered, they ran away.

One of the neighbors called the Israeli police. Around 5 pm, three police officers arrived. One of them took my testimony at home, but I didn’t see them try to pursue the attackers although clearly the settlers were still in the settlement, it was a Saturday and they couldn’t drive away.

Afterwards, the police officers said they would return, and they did at around 6:30 pm. They collected the rocks that were thrown and the broken bottles – everything the settlers threw.

They took me to Kiryat Arba Police to file a proper complaint. I learned that after the settlers left our house, they also threw rocks at the neighbors’ house.

My sister photographed the settlers as they were running away, and when I gave my testimony to the police, they took the picture. The next day, an investigator came and completed the investigation.

I remember two of the attackers – the guy who hit me and the guy who was close to me, even though they all looked the same, with sidelocks and kippahs and white shirts and dark pants. The guy who hit me had light skin, was 1.70-1.75 meters, medium build. His hair was a little long, dark but not black. The second guy was the same height, medium to skinny build, had slightly curly black hair curly, sidelocks and a kippah. It was more important for me to defend myself and I didn’t notice details.

I was afraid, I didn’t know what to do, it was an unpleasant situation when guys want to hit a young woman who’s alone.