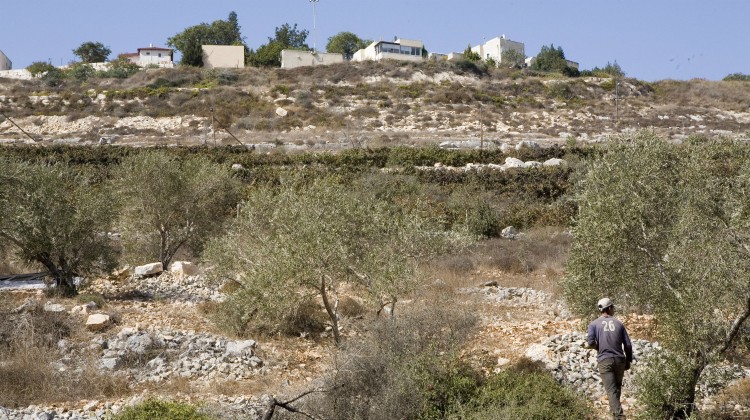 My family lives in the village of Tell. Thirty dunams of my family’s land is on the bypass road that connects Tell, Far’ata, Jit and Immatin, about 500 meters south of the outpost Havat Gilad. There are 600 olive trees on this land.

On Tuesday, October 16, 2007 at 7 am, we went to harvest the olive trees on our land. We were four men, six women and four-five kids, all from our family, brothers, cousins. After about two hours, at around 9 am, while I was up in an olive tree, stones started landing around us. I saw about six settlers coming from the direction of Havat Gilad, all wearing kippahs, fringes and all had beards and were young, about 30 years-old. They stood on a small hill about ten meters away. I couldn’t make out their features because of the distance. I couldn’t see whether they were carrying weapons.

One of the settlers approached my cousin M, an old man 64 years-old and said, get out of here or you’re going to die. The rest continued throwing stones. I climbed down from the tree but continued gathering the olives that were on the ground, I had my back to the stone throwers. Suddenly I was hit in the head. I fell and lost consciousness. When I awoke, I saw ZS, the field coordinator for Rabbis for Human Rights bending over me. I didn’t know how long I was out for. ZS and my brother MA poured water over me. After I recovered a bit, I walked with ZS to his car, my head still bleeding from the wound. When I got to the car, I saw the settlers getting into their car and driving towards the settlement. I can’t describe their car.

Just then, three Israeli jeeps drove up – two border police and one police. There was a driver and an officer inside the police jeep. An ambulance arrived from Qalqiliyah, and they dressed my wound, and an Israeli journalist photographed me and took my testimony.

The officer asked me what happened and took me back to where I was when I was wounded to confirm the location and the events. Only later, an ambulance arrived from Nablus and took me to Rafidya Hospital in Nablus. They stitched my wound and I was hospitalized for three days.

Later I learned that someone from Far’ata who was passing the road witnessed the incident and called up ZS from Rabbis for Human Rights, and he called the ambulance, the press and the police.

On February 11, 2008, the police informed Yesh Din that the investigation file was closed due to “offender unknown”.
Silence is Golden