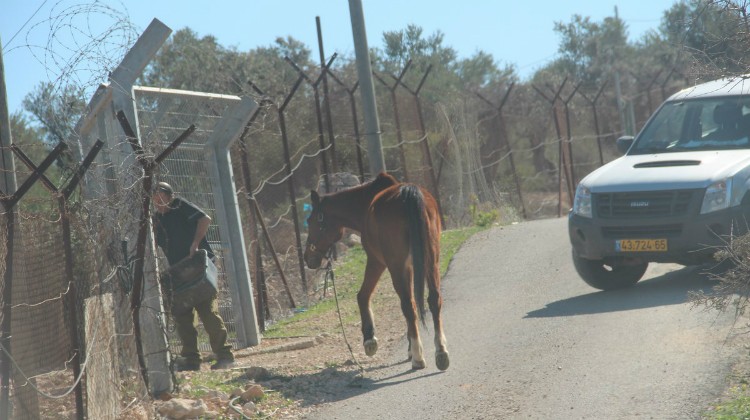 My father passed away in 2003 and left us, his five sons with 11 dunams of land. We have the official document attesting to division of the estate signed and sealed. The land includes a hill, a slope down from it and a level area at the bottom of the slope. There are olive trees planted on all the land. It is north of the settlement Sha’arei Tikva and south of the village Azzun ‘Atmah. There’s about one km between our land and Azzun ‘Atmah, and about 500 meters between our land and Sha’arei Tikva. Our land is sandwiched between two fences. One is the settlement’s barbed wire fence that has a gate for the use of the settlers (they have the key), and the second is the separation fence.

In February 2006 I filed a complaint at the Kedumim Police with the assistance of Yesh Din for takeover of land I own, where settlers built a stable. In November 2006, a lawsuit was filed to the Jerusalem Magistrates Court and in February 2008 the court ruled that the settlers must vacate the land by February 1, 2009. Because the horses weren’t removed from my land, Yesh Din continued to visit my land throughout 2009 and documented the horses still left on my land.

On Sunday last week, February 2, 2014 at 12 pm I went to the settlement Sha’arei Tikva. I arrived with my driver, my driver is an Israeli from Petach Tikva so his car has Israeli license plates. Every week I visit my land, to see what’s happening – whether anything has changed or not.

I can access my land whenever I like but I can’t farm it. About two years ago I received a permit to enter Sha’arei Tikva, but the permit isn’t to farm my land, only to enter and observe. You need a special permit from the army to farm the land, which I use to enter through the farmers’ gate and not the main gate to the settlement Sha’arei Tikva. I receive such a permit twice a year, once during plowing season and once during the olive harvest.

The horses eat from my olive trees and kick them. Once I planted new saplings and the horses destroyed all the saplings I planted. Last time I visited, on Sunday, the trees were in the same condition – the horses do as they wish to them.

During my last visit, like the previous times I went to my land, I didn’t see any people there.

On May 18, 2014 the police closed the investigation file due to “offender unknown”. Yesh Din is monitoring and providing legal aid.
Silence is Golden