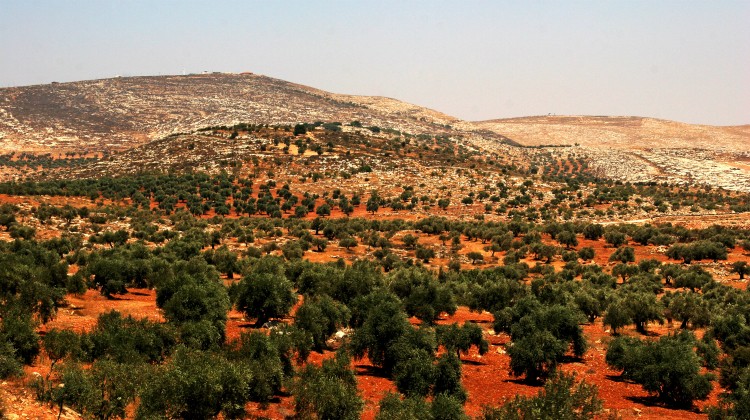 I was harvesting the wheat on our land east of Yanun. Around noon, eight settlers came, some were 30-35 years old and some were 14-15, several of them were armed. They asked for my husband SB’s ID card. I went over to the tent where we keep our belongings and got the ID card. But was my ID, and not my husband’s. The settlers started mocking us and sent my husband back home to Aqraba to bring his ID card, over an hour on foot, about three hours round trip.

I stayed because the settlers had my ID card. For about an hour they mocked me and laughed and spoke in Hebrew. I don’t understand Hebrew. I asked them to return my ID card but they refused to, and then after an hour they walked of towards the settlement of Gittit. But we know they are from the settlement of Itamar, because we’ve encountered them several times in the past. While my husband went to the village and I stayed, I was afraid to be without a man and surrounded by eight armed settlers. I sat on the ground. Two hours after they left, my husband returned with his ID card, but the settlers had gone.

Later, my husband told the Palestinian police in ‘Aqraba about the incident, and the policemen said we’d have to go to Nablus for a new ID. We didn’t, because we have a flock to tend to and we don’t have the time.

My wife SB and I herded our flock in May to a watering hole, about two-three km northeast of the village. This was in the morning.

While we were there, eight settlers arrived, probably from the settlement of Itamar, and asked me for my ID. Maybe they thought I was from Hamas, because I was unshaved and had a beard. I told them I work hard and didn’t have the chance to shave and that my ID was at home. They took my wife’s ID and told me to go back to the village and bring mine. It’s about an hour’s walk back to the village, even riding a donkey. I was afraid of them because two of them were armed.

I began walking towards the village and they stayed there. My wife was very frightened. I arrived at the village and took my ID and returned after three hours. The settlers had left and taken my wife’s ID with them. She’s been without one since. She’s unwell and needs treatment in Nablus, but now she can’t go to Nablus because they won’t let her pass at the checkpoint, and I don’t have the money for a new ID, which costs a lot of money.

On November 10, 2005 the police informed Yesh Din that it had closed the investigation file on the grounds of “offender unknown”.
Silence is Golden