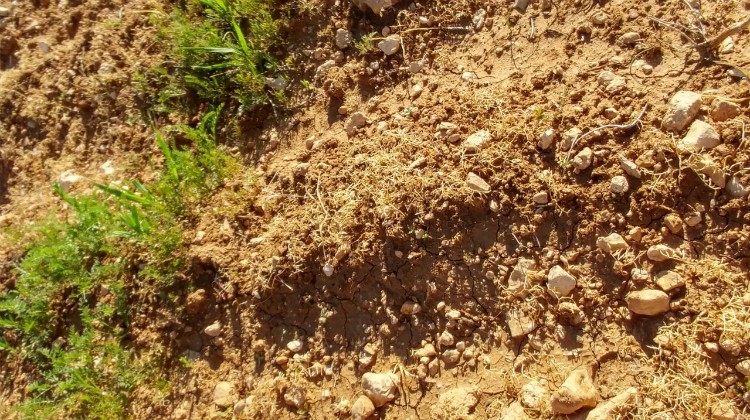 HH, 47,married and the father of seven children, a-Tuwani

The village is a few hundred metres south of Route 317 and is surrounded by the settlements Ma’on, Havat Ma’on and Avigail. It’s a small village, about 350 residents who all make a living farming, vegetable gardens, raising sheep and olive trees. The village suffers from settlers, who mainly come from the direction of Havat Ma’on. They come to the center of our village, sometimes accompanied by soldiers about every two weeks. They dance and do all kinds of provocative things. Two weeks ago, they also beat children. In our fields, they break trees and damage crops [previous complaints were submitted with the assistance of Yesh Din].

We have an plot of about 50 dunams called “el Halha” southeast of Havat Ma’on, near Route 317.

About three months ago, we started planting olive trees on our land as well as vetch and lentils. There isn’t any water there, so we put a bottle of water by every plant to drip and every week we came to fill the bottles with water. Everything was fine up until last week.

On February 28 it was raining, and this morning at about nine am I looked towards the plot and noticed that something was wrong. A big part of the field looked like it had been burned. I went over and saw that 15 olive saplings had been uprooted and had disappeared, and the area where we planted was partly brown, as though it had been sprayed with poison. About four dunams of vetch and lentils had been sprayed and were completely burned.

I spoke with the police, and a civil administration infrastructure officer arrived and then the police came and they called a tracker from the army. The tracker said the rain had wiped out any tracks.

[Note: that same day, a fence surrounding a nearby plot was cut and 50 young trees were damaged]

On April 30, 2017 the police informed Yesh Din that the investigation file was closed on the grounds of “perpetrator unknown”.
Silence is Golden