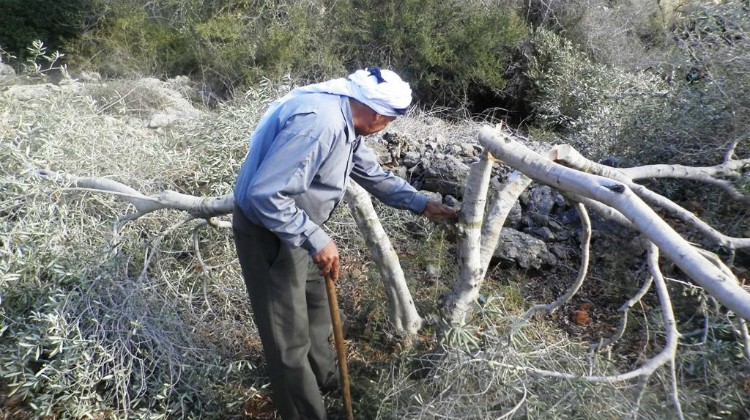 I own a 32.5 dunam plot that is now inside the settlement Karnei Shomron. I bought the plot in 1964 in the days of Jordanian rule. The plot is called Qata’in al-Jara and I have the deed. There were ancient olive trees on the plot when I bought it. I planted olive, almond, fig and pomegranate trees.

There’s a long history of conflict with the settlers of Karnei Shomron over this land and multiple legal proceedings dating back to the days of Plia Albeck. In practice, there is a gradual takeover of the village’s land. Right after the occupation began, the civil administration began planting trees on uncultivated land and creating wooded areas.

I go to my plot twice a year, only after coordinating with the DCO. I suffer from attacks, threats and damage to my crops by settlers from Karnei Shomron.

After about a month and a half during which I tried to get a permit to go to my land inside the settlement Karnei Shomron, the civil administration officer N agreed that I come on September 11, 2013, then he switched it to September 15 at 10 am. I wanted to check on my land and on the trees. On September 15, 2013 I went with my sons to the gate of the settlement at 10:30 am.

We waited for half an hour and at 11 am, officer N arrived and asked me how long we needed. I said around two hours, and he said that there weren’t enough soldiers so he could agree to just half an hour. We entered and then I saw that 15 trees had been cut down. By the condition of the trees and of the olives, I could tell that some had been cut down a week ago and some a day or two ago. The trees that had been cut down were 40-45 years old.

First, they sawed a little with a hand saw, and then they pulled and broke the trees. This method of cutting makes rehabilitation longer and more difficult for the trees, it takes up to twenty years. They threw the branches they had broken on the ground.

Officer N saw this and took photos of everything and then called the police. The Israeli police arrived after about half an hour and said we had to file a complaint at the Kedumim Police. The police officer didn’t speak Arabic. He also photographed the broken trees.

I went to Kedumim with my son and filed a complaint.

Officer N said he’d send the photos to the police. I said this couldn’t go on, because it happens over and over and, in the end,, I won’t have anything left, and that I wanted a solution. He said he understood and that he wants to suggest putting up cameras. He says the same thing every time, but nothing happens. Then he said we needed to come and clean up the branches because he was afraid they’d come and burn the branches. We arranged for me to come with workers to clean up on September 16. In the end it was delayed to September 17.

On September 17, 2013 according to my arrangement with officer N, I went to the settlement gate with my son. We were supposed to clean up the branches that the people who cut down my trees threw on the ground. N didn’t come but there were soldiers and a security officer from the settlement Karnei Shomron.

We didn’t do any work and I went to Kedumim with my son. We waited for about two hours at the gate and in the meantime a jeep pulled up with a high-ranking civil administration officer who knows me. He said N had requested he go see what happened on my land. He said he had gone over and seen a horrifying sight. He said he had a meeting with the military commander in the area and that this needed a real solution. He also said he called trackers and a forensics team. I felt that this time they were taking it a little more seriously.

In the end, we were let into the police station and filed another complaint.

On November 10, 2013 the police closed the investigation file due to “offender unknown”.
Silence is Golden