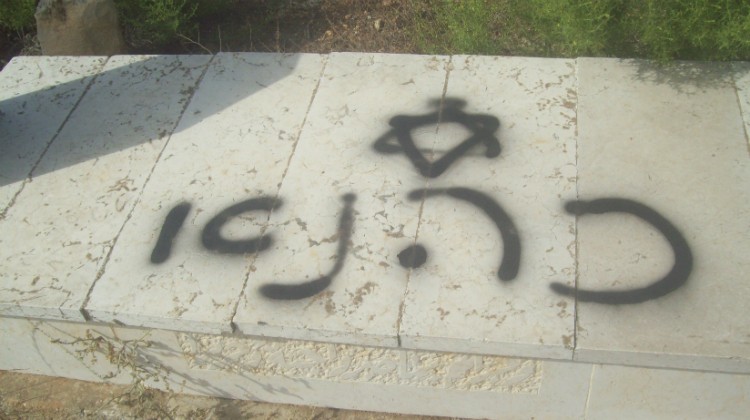 I serve as the deputy mayor of the village and I’m very involved in village life. Kafr Qadum is north of route 55, the settlement Kedumim and the outpost Ma’ale Yishai were built on our land.

There are 3,500 residents in Kafr Qadum, and now there are 1,300 dunams, including the village houses. In the past we had much more land, but some was taken for settlements and some are in Area C and we have no way of reaching them.

On Friday at 1:30 am, six or seven armed and masked settlers came to the village’s eastern entrance and sprayed slogans on the houses: “Shevut Ami” and “revenge” and sprayed a star of David and offensive slogans. They went over to the cemetery and broke gravestones, sprayed “Kahane lives” and “Badariya” and sprayed stars of David on other gravestones.

Two people who live by the graveyard and whose houses were spray-painted woke up and saw the settlers, and when the settlers saw they were being observed they ran off towards the settlement Kedumim. The next day, we informed the Palestinian DCO, which informed the Israeli DCO.

At 11 am, the army and police arrived and began checking the slogans and calming people down, people in the village were very upset. They took photos and asked us to remove the slogans and following the Palestinian DCO’s request, the slogans were erased. They took testimonies from two of the house owners, the police searched for evidence but didn’t find any.

I think this incident happened because the village residents, with the assistance of the Red Cross went and painted Badariya’s house [a house privately owned by a Palestinian woman, which settlers tried to take over several times] white instead of the blue, which the settlers painted a few months ago, because one of the slogans spray-painted on the gravestones was Badariya’s name.

On April 20, 2011, the police closed the investigation file due to “offender unknown”.
Silence is Golden