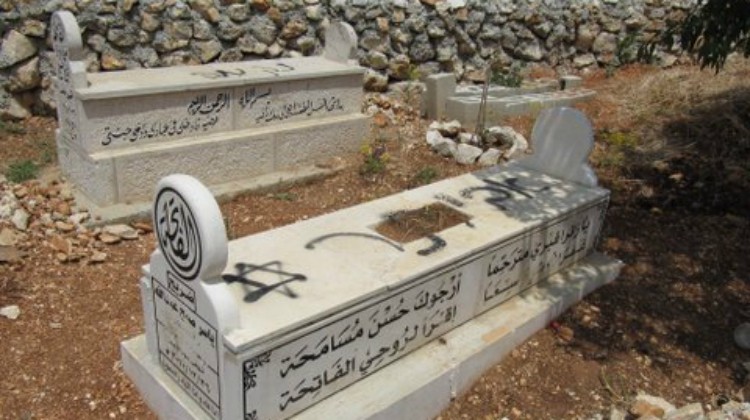 My plant nursery is at the entrance to a-Sawiyah from route 60, on the east side below one of the outposts of the settlement Eli. The nursery is twenty meters from the road, and about 200 meters as the crow flies from the outpost. My clients are Palestinians and settlers and ordinary people passing by.

On Monday May 13, 2013 at 7:30 am, my employee at the nursery called me and told me that apparently settlers had damaged the nursery and there was a lot of damage. I left my house in the village immediately and went over to the nursery. I saw a lot of damage and graffiti sprayed on the clay pots with “Eviatar revenge”, and also several Stars of David.

They destroyed 250 olive and fig saplings and 100 flower plants. We discovered that they had cut the fence at the edge of the nursery and the terrorists came in through it. The damage is ILS 10,000.

As I was assessing the damage, my neighbor A arrived, he lives 300 meters away from the nursery. He told me that his tractor tires had been punctured and graffiti sprayed on the door of his shed, and on two gravestones by his house. Another neighbor named S told us they had punctured the tires on his car. I think the same group of settlers did all of this.

I immediately notified the head of council about the incident and he called the Palestinian DCO and they informed the Israeli DCO. At around 4:30 pm, Israeli DCO and police teams arrived, along with a forensic team and Shin Bet. They took my testimony and tested for fingerprints and photographed the damage and the slogans on my property and in the village. After that, I drove to the Ariel Police with them and filed an official complaint.

Since then, I haven’t heard anything and I’m waiting.

I live in a-Sawiyah. I live on the eastern side of route 60, 1.5 km from the fence of one of Eli’s outposts, which have taken over all the hilltops above the village. My house is about 500 meters from route 60 and my house has a view of the road from above.

By my house, my father, mother and brother are buried in a small and well-kept plot.

On Tuesday May 13, 2013 at 5:30 am, my wife woke me up and told me that our tractor and trailer tires were punctured, and there are slogans sprayed on the gravestones. My wife always gets up first and goes out to work in the field by our house.

I went outside right away and saw that all four of the tractor tires had been punctured, and a slogan had been sprayed on the storage shed. We didn’t know what they had written but neighbors who read Hebrew told us it said “Eviatar revenge”. On my father’s gravestone it said “Revenge” and on my brother’s – “Eviatar”.

I immediately called the head of the village council and informed him about the incident, and he said he would call the Palestinian DCO. In the afternoon, officers from the Israeli DCO and police arrived. They took my testimony and photographed the damage and the graffiti. A forensics team took fingerprints and marked the puncture marks on the tires with stickers.

They asked me to go to Ariel Police and file a complaint. The owner of the plant nursery, my nephew and I took a taxi, and all went to file a complaint. At Ariel Junction, a police car picked us up and took us into Ariel.

I filed a complaint with the investigator. The police treated the incident at the nursery and the damage to my property, the tractors and the vehicle as a single incident and all the complaints were assigned the same file number. The car owner didn’t file a complaint because the police told him it wasn’t necessary, because it was all one incident.

On August 11, 2013 the police closed the investigation file due to “offender unknown”.
Silence is Golden