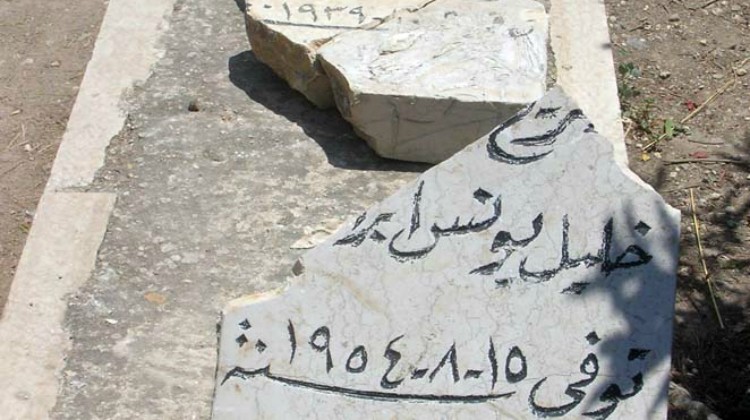 In the village center of Kifl Haris there is a burial site considered to be the grave of [biblical] Joshua. The building is a traditional sheikh gravesite, meaning a stone building with a large domed roof. The gravesite is a few steps away from the village’s mosque and the city council, really in the center of the village. In fact, there isn’t an ancient grave inside the structure, except in a different room, my grandfather’s grave, which was also desecrated during the incident. Also, at the outskirts of the village to the south, among the village houses, there are two gravesites attributed to the Prophet Jonah and the biblical Caleb. There’s a sign in Hebrew at the entrance to these sites noting the names of those buried there. Right by them is a small Muslim cemetery with around twenty graves, of which nine were desecrated.

Once a year on the anniversary of Joshua’s death, usually in April, many religious Jews go on a pilgrimage to the gravesite. This year it’s happened three times – in February, April and last Thursday, meaning June 7 at midnight. These pilgrimages always have an army escort.

Two days ago, around six pm, four military jeeps and one security vehicle from the settlement of Ariel arrived with a few settlers from Ariel, they began cleaning the gravesite. They brought an air compressor and whitewashed the walls.

We received no early warning, no formal update, no loudspeaker announcement, no order was presented. No orders were published or loudspeaker announcements were made in the past before the pilgrims arrived. Besides one time maybe when they broke windows, there was never any damage done to the graves. While the army was present, the residents were asked to move their vehicles from the side of the road to allow the convoy pass. While no curfew was announcement, in practice the village’s residents weren’t able to pass or move about.

My friend, FB, who wanted to drive his visitor back home – from the east part of the village to west part, a five minute drive, had to make a detour and drive around three villages, Zeita, Qirah and Haris in order to return to his house because the roads inside the village were blocked off to the residents.

At about 10:30 or 11 pm an Israeli officer, Y, the DCO’s deputy commander phoned me, as the head of the council, and informed me about be a nightly visit to the gravesites and that he hoped they would pass quietly and no harm would be done to the pilgrims or the residents. I said: “You’re telling me this now? I’ve been seeing preparations for their visit for hours!”

By route 5, the part that is being expanded opposite Ariel, the army prepared a large base for all the necessary supplies, such as water, radio communication and first aid. That’s where thousands of pilgrims congregated and marched to our village that night. Some came on foot and some rode in two large trucks that shuttled pilgrims back and forth from the huge base camp to the center of our village.

Most of the pilgrims were men, there were a lot of children and a small number of women. Some were wearing white ultra-orthodox dress. They went to Joshua’s gravesite and then they dispersed without army supervision. All night long – until 7 am they celebrated – screaming, yelling and dancing and making a huge racket, harassing the village residents, who didn’t sleep a wink all night long.

On their way to and from the gravesite, the pilgrims who were celebrating rang the doorbells to private residences, broke windows, slashed the tires on five cars, damaged pipes, swore and sprayed offensive graffiti such as “[Meir] Kahane was right”, “Arabs are sons of whores”, and “death to Arabs”. At daybreak, at the time of Muslim morning prayers, we heard them cursing the Prophet Mohammad.

They desecrated nine graves in the cemetery by the gravesite of Caleb, as well as my grandfather’s grave inside the structure where Joshua’s gravestone is. The army prevented the Muslims from going to the mosque at daybreak to pray.

Yesterday, Friday June 8 after the incident and the media reports, I got calls from the DCO all day long, but I didn’t answer them.

This morning at six, the Israeli DCO officer Y and another officer I don’t know, as well as six police officers came to my house, and outside there were about ten army jeeps waiting. We went to observe the damage, they photographed everything and apparently filed a police complaint. The officer Y said the army strongly condemns the incidents that took place, and announced they would be willing to repair the damage and return things to their previous state. I told him that I didn’t want the army to come make repairs, I wanted to file a complaint. I would go to the police myself, I’ll go to trial and have a court decide.