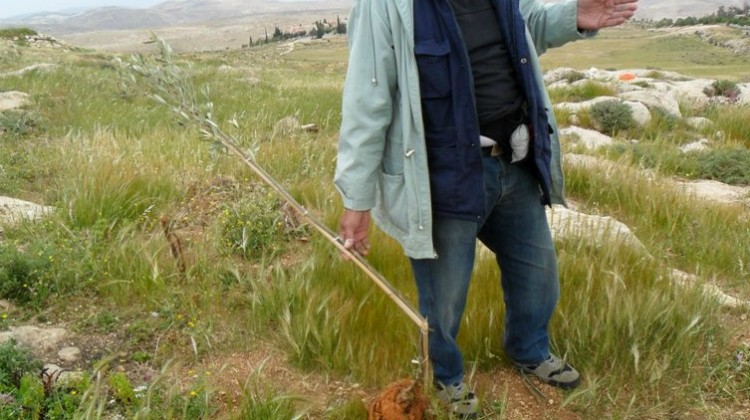 I’m an Israeli citizen, I have a blue ID card. I own 48 dunams of land in the eastern part of Anata. The plot is on a hill about 300 meters north of the settlement Anatot-Almon. I have all the ownership documents to the land – the deed, inheritance document, transfer of ownership, and a permit from the civil administration.

The settlement of Anatot is surrounded by a fence. Since 2004-2005, the settlement fence has moved and crept towards the village Anata, so that our plot in the east part of Anata was swallowed up inside that dynamic fence and is now inside the fenced-off settlement area. I objected to the fence ever since it was put up.

Up until two years ago, we grew seasonal crops, and then I decided to plant trees. I guess the settlers didn’t like that. Because ever since then, I’ve had problems accessing my land and they’ve damaged my trees, and five months ago, for the first time they uprooted about thirty trees [a complaint was filed with the assistance of Yesh Din].

[The most recent chain of incidents began] On March 14, 2011 at 9 am, J – a civil administration officer called me, I know him from one of the previous meetings about my land. J said he was sorry to inform me that TS, the settlement civilian security coordinator [CSC] of the settlement Anatot-Almon had called him and told him that trees were cut down in my plot, and that he had gone over and seen the broken and uprooted trees.

Officer J added that the settlement residents offered to pay for the damage. He asked me to come right over to speak to the settlers. I understood their willingness to compensate me to be an admission of guilt.

I went over to my land, and TS the CSC was waiting. He said he was truly sorry, and that he didn’t do it and didn’t have any role in it and that he himself had called the civil administration and reported the damage. He said that the settlement residents had made an offer that I accompany him to a plant nursery in Hizma and choose trees to replace those cut down. Eighteen trees were cut down, of them two olive trees that were two-three years old and the rest were ornamental and fruit trees. We drove to the nursery and I bought ILS 850 worth of trees, equal to the value of the trees that had been cut down. This doesn’t take into account the time I invested in working, water expenses for irrigation and transportation to go to my land. The settlement council sent a worker who planted all the trees that were bought. Although they planted the trees, I reserved the right to complain about the damage and that same day I went to the police station in Ma’ale Adumim and filed a complaint.

About ten days after the incident, TS the CSC came to me and complained that he had been investigated by the police for five hours because of me. He said he was blamed for everything although he had no part in it. I can understand him personally speaking, I can, but as the person responsible for security it’s his role to prevent such incidents. I want to stress that since the legal advisor’s decision recognizing my ownership of the land and my right to access it, the CSC treats me fairly, as he knows I’m right.

On April 13, 2011, my wife and I drove to the land. While we still were in the car and were nearing the land, my wife told me that she sees there aren’t any trees.

We walked over to the plot and saw that about 14 large trees had been cut down. Six ornamental trees, six fruit trees and two olive trees. This hurt me very much. I called the civil administration, but the line was busy, so I called the CSC and the police. The CSC came over right away in a border police car. They looked at the damage and told me to file a complaint. The CSC was very angry and called the civil administration. Five minutes later, J the civil administration officer called me and said he was on his way. He arrived with the regional commander and three police cars, one belonged to the forensics unit. They took photos of the trees and told me to file a complaint at the police station. The civil administration and police officers called the settlement secretary over. When he arrived, they took him aside and I heard them talking harshly, it looked like they came down hard on him. A day earlier, I had been over, and everything was ok, it was also evident from the trees that they had been cut down very recently.

I’d like to note that 10-20 meters north of my land there’s a water tower with cameras installed on it, that apparently document what goes on to a control station in the settlement. The next day, I went and filed a complaint at the police station in Ma’ale Adumim.

On Monday May 2, 2011 at 9:30 am I went to my land and found 22 trees uprooted – two olive trees, seven fruit trees (lemon, peach and loquat) and small cypress trees. This time, different to the previous incidents in which trees were uprooted from my plot, this time the uprooted trees were taken, they disappeared. I imagine that whoever uprooted my trees came with a vehicle and loaded the trees. There were nine small trees left. When I saw what had happened, I called the police and asked them to come over and see what happened. The officer said I had to go to the police first and file a complaint. I also called J, the civil administration officer and informed him about what happened. He told me to count the trees that were uprooted and referred me to the police to file a complaint.

After speaking with J, TS the CSC arrived. He said that the settlement administration spoke to him and were willing to compensate me for the trees that were uprooted. I declined his offer because of the similar incidents in the past. The CSC expressed his sorrow at what had happened, he claimed that during his patrol of my plot on Friday April 29, 2011, he hadn’t noticed anything out of the ordinary. He guessed that the trees had been uprooted on Saturday.

That day I went home and on Tuesday May 3, 2011, I went to the police station in Ma’ale Adumim and filed a complaint with an investigator named MZ. The investigator said that because I filed a similar complaint in the past, she would attach the new complaint to the existing file, and not open a new investigation file. I didn’t receive any receipt from her. I told the investigator that I suspect that a gang from the settlement is involved, with the knowledge of MY, who runs the settlement and YA, a resident. When I planted my trees in 2011, MY warned me that he would uproot my trees, and in the past MY said, “Don’t even dream of returning to farm this plot”.

On Sunday May 8, 2011 at 1 pm I went to my land. It was a hot day, and to protect myself from the sun I tied a bedsheet above me, like a temporary sunshade. A little while later, several settlers passed by my land and watched me. At around 3 pm, an officer in a border police uniform named SA came over, he lives in the settlement of Anatot-Almon and is responsible for the area. The officer asked me whether I have a permit to set up the shelter. I said that I take it down every time I leave. He photographed it and left, I took a picture of it, and the empty plot after I dismantled it when I left.

The next day it was the eve of Israel’s Memorial Day and I didn’t go to the plot. On May 10, Israel’s “Independence Day”, I went to the plot for a barbecue. I found that the remaining trees on my land had been uprooted; my tools – my pick ax, my hammer, my rake and my hoe had been stolen; the sheets I had been using for my shelter and wooden pallets had been thrown away, and the water barrels I had and the water trough I had filled and set out for wild animals were poured out and thrown far away.

I called the police and was told to come file a complaint. That same day, settlers came to my land on tractors and asked me what I was doing there. I said that this is my plot, and later I set rocks on the path at the entrance to my plot, according to the police’s instructions that I fence my plot so that nobody enters it. Like I said, the civil administration recognizes my ownership of this land.

On Wednesday May 11 I went to the police station in Ma’ale Adumim to file a complaint with the investigator MZ, who took my complaint in the previous incident. The investigator told me that she was attaching this testimony to the previous complaint, so that it would be dealt with seriously by the army and the police. She said there was an important meeting planned with representatives of the settlement Anaton-Almon and this issue would be raised, and probably there would be cameras set up on my land to monitor.

The police merged the complaints filed during March-May 2011 into two investigation files. On December 26, 2011 the police informed Yesh Din that both files, addressing all the complaints, were closed due to “offender unknown”.
After the files were photocopied and reviewed, Yesh Din’s legal team appealed the closure of the investigation files. The appeal noted that the police had not taken J’s testimony (the civil administration officer) or testimonies from other settlement officials who were involved in the incidents or could suggest suspects.
On May 15, 2012, the State Attorney’s Office rejected the appeal, stating that “The current information [in the investigation file] does not include any information that could help exhaust the procedure at this stage.”