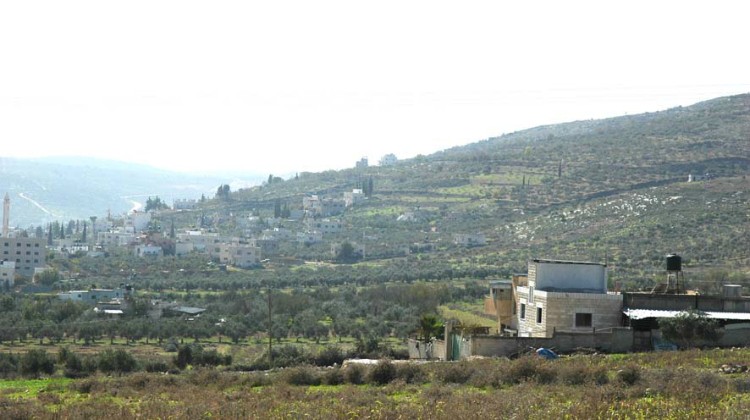 At about 10:20 am, when were about one km from Huwarah, about 1.5 km from the settlement Yizhar, we heard 8-7 shots fired. I was wounded in the right thigh and fell down. AS dressed my wound and then went with me by ambulance to a private hospital in Nablus. I was hospitalized for three days. I was charged ILS 5,500 for treatment because it isn’t funded by the Palestinian Authority and the government hospital is on strike.

The bullet entered the back of my thigh and was lodged in the front of my thigh. I was operated on and I’m still experiencing a limited range of motion. AS informed the Palestinian police, and they came to the hospital to take my testimony. The following day, an Israeli DCO officer came to investigate. On November 16, I was released from hospital.

On Wednesday November 14 just before 10 am, AA and I went over to JH’s, to the Huwarah gas station and went to look at JH’s olive trees. We drove over in my car and parked it by the porcelain factory in Huwarah, just by the main road. We walked up the hill towards the grove, about 1-1.5 km.

Five minutes after we got to JH’s land, I heard gunshots coming from the settlement Yizhar, about 1.5 km away but I couldn’t see anything. As we were running back to where we came from, I heard AA call me. I glanced back and saw him lying on the ground. I could see his thigh was wounded. I tied his thigh with a piece of fabric I had and then we lifted him up and hoisted him onto my shoulders, and we walked down to my car.

We drove to the infirmary in Beita, and from there we called the Red Crescent asking for an ambulance. An ambulance arrived and took us to Nablus Specialty Hospital – a private hospital in Nablus. That same day, an Israeli DCO officer in Huwarah called me and we walked to the site of the incident. The Ariel Police also called me that day, and the next day three policemen escorted by an army jeep came and I went to the site with them. We got to the site and then they said, “Go home” and they stayed. I gave my testimony at the Israeli DCO in Huwarah and to the policemen who came to take my testimony.

I have about 700 dunams of land, part of it reaches from Huwarah (route 60) in the east to the settlement Yizhar, which was built on my land. I have olive trees on my land. I’ve had problems with settlers from Yizhar in the past, they’ve torched my trees, stolen sheep, and the like.

On Wednesday November 14, 2006 at 9:30-10 am AA, AS and I went to my land to check on the olives. We heard a round of 7-8 gunshots that came from the direction of Yizhar from up the mountain, about 1.5 km from us. We didn’t see any settlers or anyone else. AA’s leg was wounded, we dressed it and AS rode with him in the ambulance to a private hospital in Nablus. The hospitals were on strike, so he was treated at a private hospital.

We called the police, that came twice that day, AS accompanied them to the site of the incident.