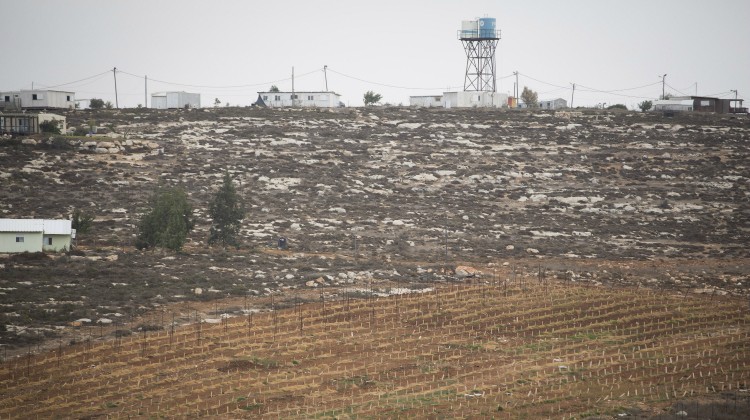 I live in Turmusaya, I’m a farmer, my family and I own farmland on the south side of the village, close to the outpost Adei Ad, which is built mostly on my family’s land. We are in a very difficult situation in terms of violence from settlers of the outpost Adei Ad. We have suffered for years, they were always violent, but since Yesh Din filed the petition to the High Court against the outpost, I sense a worrying and severe increase in the number of incidents and their severity.

Yesterday, March 21, 2015 at 10 am we were on our land planting with four workers. I was about 700 meters south of the last houses of the outpost Adei Ad, an area defined as Area B and not Area C.

Suddenly 12 masked settlers surprised us. We were focused on our work. They got to 10-15 meters from us. They were all dressed in white, their Saturday clothes. When I saw them, I started running towards my car and then one of the took out a handgun and fired in my direction. I heard two shots. Luckily the bullets didn’t hurt me. I got into the car and drove away quickly with the workers. Once I was far away, I could see them returning towards the outpost.

I called the police and the Israeli DCO. Within about 40 minutes the DCO and the police arrived. They came to the site of the shooting, searched but couldn’t find the bullets.

I view this incident very severely. It’s an escalation in terms of settler violence and I’m in real danger. This issue requires a more serious response from authorities. I knew we’d reach this level of violence because the scores of complaints we’ve filed against settlers have led to nothing – no punishment and no law enforcement, and this is the result.

On April 13, 2015 the police closed the investigation file due to “lack of criminal offense”.
Silence is Golden