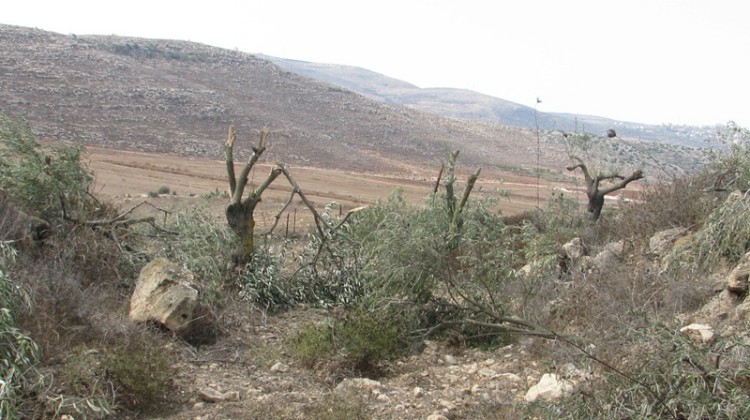 My family owns 11 dunams of farmland in the municipality of Turmusaya, in an area called al-Shia’b. This land is four km east of the village, and the settlers built the outpost Adei Ad 500 meters west of it. My father-in-law left his three sons ten dunams of land – my husband who passed away, and his two brothers. In addition to this inheritance, my husband bought another dunam in this area.

My brothers-in-law and their families live in the US, so do my three children, so that I am the custodian of all 11 dunams. My grandson R is responsible for cultivation. That includes plowing, harvesting and pruning. In all, there are about 250 olive trees, ten-thirty years old. We can go to our land without having to coordinate it, and R goes to our land every three-four months.

My grandson R told me two weeks before the incident that he and his friends had gone over to the land and hadn’t noticed anything out of the ordinary. On Friday October 8, 2010 he went to our land to assess the olive crop and discovered forty olive trees cut down. They were sawed and then broken, a method that makes rehabilitating the trees very difficult. Judging by the freshness of the trees and the olives, we think this was done one or two days before he discovered the damage. The trees were full of fruit.

Only the settlers from Adei Ad destroy the lands owned by local farmers.

On February 13, 2011 the police closed the investigation file due to “offender unknown”.
Silence is Golden