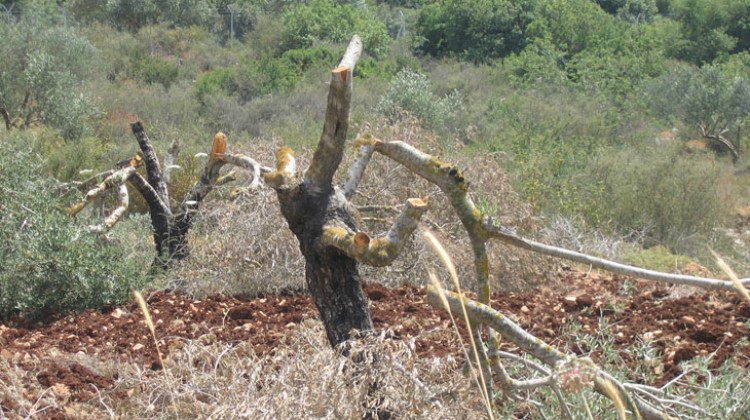 The 40 trees that were cut down are located on my plot of land, a plot of 112 dunams. The plot is close to other plots belonging to ten other families, in all there are about 3,000 dunams with olive trees planted on them. This area is now fenced off and in order to reach it, you need to enter through the main gate to the settlement of Neve Menachem [a neighborhood of the settlement Karnei Shomron]. This year, the army gave permits for only two days to tend this land during plowing season. We received just three days for harvesting this year.

The 112 dunam plot is registered in my father’s name. Of these, 20 dunams are separated by the road leading to the settler’s regional cemetery and there is no way to access this land, no matter what. All in all, 200 trees were cut down, but the other landowners did not file a complaint. I filed a complaint about the 40 trees I own.

On April 25, 2005, a man from my village passed by my land and saw trees cut down. He told my cousin about it that evening. The next day, my cousin went to talk to the settlement CSC [civilian security coordinator] of Neve Menachem. The settlement CSC checked and confirmed there were trees cut down. At the end of the day, I went with two of my cousins to the Palestinian DCO in Qalqiliyah and we filed a complaint there.

The next day, April 27, 2005 at 2 pm, I went to my plot with representatives of the Civil Administration, policemen from the Kdumim Police, the settlement CSC, and my two cousins. After that we went to the Kdumim Police and filed a complaint. We did not receive any confirmation regarding the complaint, and we don’t have a complaint number.

Since then, I’ve gone to the Kdumim Police four times to inquire about my complaint, but they didn’t let me enter [the station]. They asked me over the phone to provide documentation, deeds to the land, but they did not allow me to enter and bring them.