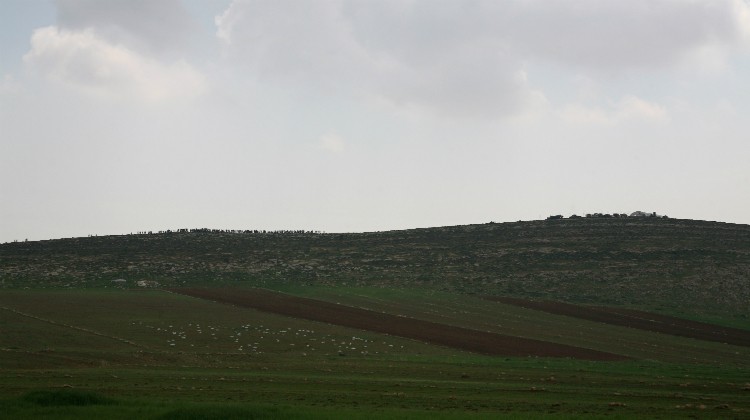 Diaa Roustom, 30, married and the father of one son, Kafr Malik

I live in Kafr Malik. I live in the center of the village with my wife and our one year old son. I make a living from farming. The settlement Kochav Hashachar is close to village. People in the village suffer from settler violence.

I own a plot of seven dunams, an inheritance from my grandfather. The plot is west of the settlement, about 150 meters from its gate. We plant wheat there. In the past I filed complaints to the police with Yesh Din’s assistance about settler attacks.

None of us farmers go near the settlement for fear of attack by the settlers. I’m allowed to go to my plot without coordination, and my neighbors and I go to our plots together and help each other.

On April 18, 2017, I went to my plot where I grow wheat to check on things. I arrived at 8:30 am and saw a settler with a herd of about 150 on my plot. I got about 30 meters from the settler. I was alone. I walked over to the settlement gate, where there’s a guard. I told him, in a mix of English and Arabic that a herd is grazing on my plot. The guard came out of his post and saw the herd and the settler. On previous occasions, we talked to a settler named B, he is probably in charge of security. I asked the guard to call B, and he did. The guard told me to call the police.

At 9 am, a big Ford SUV arrived with a policeman and a soldier and parked by the plot. The policeman came out and looked at the settler, who was still grazing the flock. The policeman didn’t speak Arabic, but I tried to explain to him that they were eating my wheat. The settler, when he saw the policeman, began to remove his herd from my field. The settler took the herd in the direction of the mobile homes in the settlement and the policeman followed him. The policeman took him into the vehicle. The policeman hid the settler’s face, and I couldn’t see him. He told me to go to the police station. I didn’t get a chance to photograph the settler. I drove my car after the officer to the station at Sha’ar Binyamin. I got there at 11:30 am, filed a complaint and gave testimony.

They destroyed 150 kg of grain, priced at about ILS three per kilo, and the damage also includes re-cultivating the field, which costs ILS 80 per dunam, and ILS 200 for pesticides.

On July 27, 2017, the police closed the investigation file on the grounds of “lack of criminal offense”.
Silence is Golden