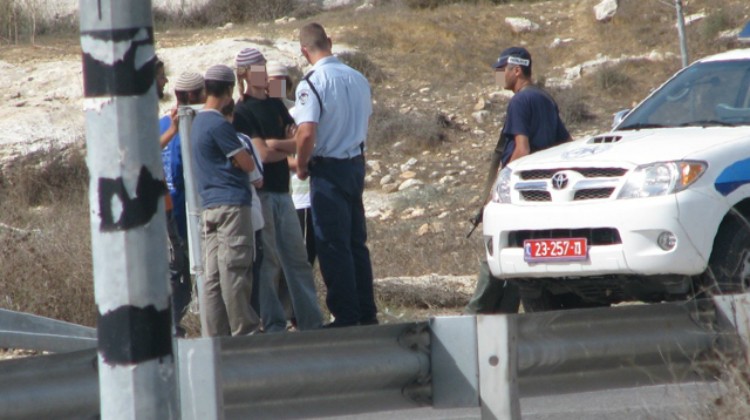 Two days ago, on October 17, 2008, I was harvesting olives on my family’s land in Kafr Qadum. The plot borders the outpost Shvut Ami and is by the road.

At about 11 am, I saw five-six settlers walking. They passed me, pushed over four-five sacks of olives I managed to pick. They scattered the olives and kept walking.

Description of the settlers: one of them was full and tall (1.80-1.90 meters), had a kippah and sidelocks, wore a white shirt and black pants, about 26 years-old, very light to red skin. He was not armed. The second one was shorter, the same age, light skin, wore a white shirt and a kippah. The third one looked like he was Yemenite. Short to medium. The rest of the gang were 17-18 years-old. If I saw them, I could recognize them.

Last week, the settlers returned to the outpost Shvut Ami 2 and set up a shack and tents. The settlers I saw came from there. As usual, a border police car stood by the main road leading to the settlement Kedumim. The police car passengers saw what the settlers did and called the Kedumim Police. The police arrived and arrested the settlers. After they were arrested, a policeman took my testimony but didn’t give me a receipt. N, chief of the police station said: “Here are the men we arrested. Point to the ones who scattered your olives.” I replied that these men passed on my land, but I didn’t see who turned over my sacks of olives. They took my testimony and I returned to harvesting.

That same day at noon, a settler came up to me (full, tall, light skinned, about 55 years-old, wearing a red shirt, a kippah and had a camera) and said: “I’m protecting the land of Israel so get out of here.” I told him that if he didn’t get off my land, I’d break my stick on him. And he left.

Yesterday, October 18 at 4:30 pm, when three volunteers from abroad and I finished harvesting and wanted to go home, eight settlers arrived, the same six settlers from the previous day and two more, they told us to get lost because the dirt road on my land belongs to them. I told them I wanted to load my olives in my car. They started shouting. The policemen in the border police jeep parked by Shvut Ami saw what was happening but didn’t intervene. When the settlers saw I was insistent, they left but said: “Just you wait. We’ll show you!”

Today, October 19 in the morning I went to my land and discovered they stole my ladder, a saw, pruning shears, and four tarps that I left on my land, and they also harvested five of my trees.

On July 19, 2010 the police closed the investigation file due to “lack of evidence”.
Silence is Golden