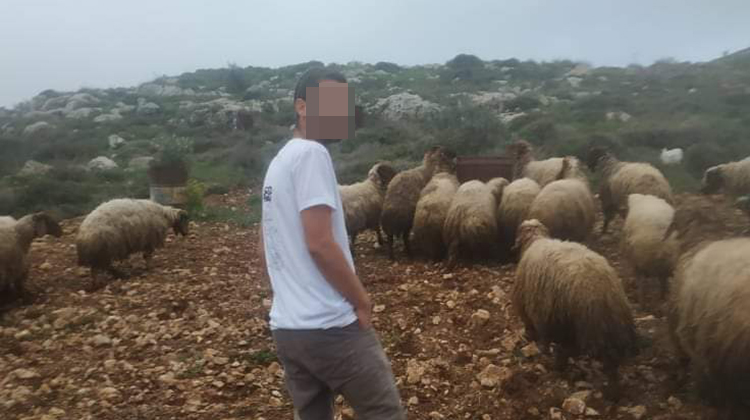 I’m a resident of Sinjil, I work in agriculture. I live by the side of the road leading to the settlement Ma’ale Levona. I own farmland northeast of the village, one kilometer from my house as the crow flies. My plot is also 100 meters from the settlement Givat Harel as the crow flies and 200 meters west of the settlement Givat Haroeh. I have a 40 dunam-plot. For years I’ve been trying to rehabilitate the plot by planting seasonal crops, such as sage and za’atar and by planting olive trees. The Red Cross helped me and provided the saplings. I managed to rehabilitate just 80 percent of the land. The settlers, with the army’s backing and the Civil Administration’s enforcement, constantly interfere with my work.

On August 20, 2020, while I was working on my plot a settler appeared and introduced himself as B, he was accompanied by about 20 settlers of various ages. They invaded my plot and built five large tents about 12 meters each, shelters for livestock, an electricity generator and a water tank on my land. In this way, they established a new farm on my land. Building farms this way is an old-new settler strategy – conquering Palestinian inch by inch and expelling us from our land.

Just two days later, a new outpost sprang up on a plot that belongs to other landowners, also from Sinjil, about 400 meters from my plot. The landowners immediately filed complaints and four days later the settlers were evacuated. The settlers were still determined to establish a new outpost and they moved to another plot. Now they set up 200 meters south and below the hill where there is an army base, on private land. The landowner complained at the Binyamin Police and the Civil Administration in the base at Beit El. In the meantime, the settler-rancher was not evacuated and settled at the site. He fenced off the area and built shelters and has a flock. There are several hilltop youths there with him and he takes them to attack farmers working in their fields. Of course, he grazes his flock on our land. He is the source of increasing violence. This is the method these violent settlers use.

On Wednesday February 24, 2021, I was home in bed when at 7 am a neighbor farmer woke me up and said settlers were on my land with their flock. These are settlers from the ‘agricultural farm’ that was recently established in our area. I went to my land immediately and arrived 20 minutes later. When I arrived, I saw the settlers’ flock on my land. I took photos of the settlers from about 50 meters away, him with his flock. I saw him but he didn’t see me – and that’s important because I wanted to prevent the settler from running away before the police arrived.

I called Yesh Din and asked them to help me call the police to my land because when I call them, they don’t respond and certainly don’t come. I also called the mayor and asked him to inform the Palestinian DCO about the incident. Yesh Din called the police and they promised to deal with the incident and dispatch a unit. The Palestinian DCO also promised to deal with it. I waited on my land for an hour and a half but neither the police nor the DCO arrived. After an hour and a half, I saw the settler leave my plot and move to the neighbor’s plot. His flock grazed there for about 20 minutes but the police and DCO still didn’t come. After the settler left, I came out of ‘hiding’ and went over to my plot and saw that the flock devoured about 60 saplings. It’s important to note that the settlers take turns, and every invasion could be a different settler.

On February 25, 2021, I went to the police station at Sha’ar Binyamin with Yesh Din to file a complaint. After waiting for four hours, I was received by an investigator. I wanted to tell him about all the violent incidents I suffer from the settlers, but he demanded I only complain about the last incident. Every time I tried to complain about the difficult incidents we’ve experienced for years he shushed me and claimed that I could only file a complaint for a single incident. I gave him photographs of the settlers and of the flock devouring the crops.

On July 19, 2021, the police informed Yesh Din it had closed the investigation file due to “offender unknown”.
Silence is Golden