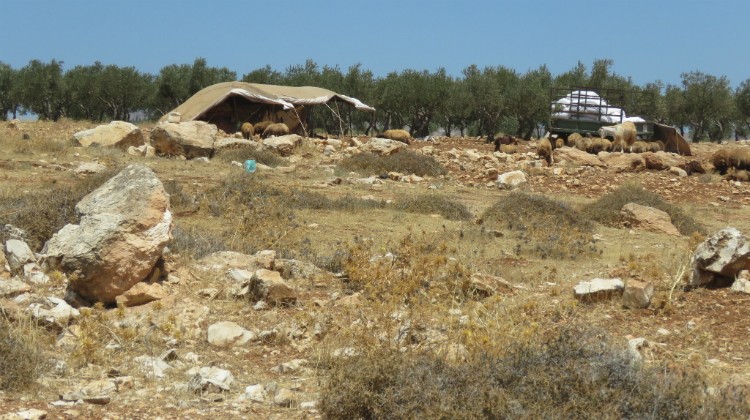 We have lived here for many years on a-Taybah land east of the village and about one kilometer west of the settlement Rimonim. We constantly suffer from settler harassment. A year ago, several of our sheep were stolen. We filed a complaint and the police came and took testimonies. We don’t know what happened with that complaint. The same group of settlers harasses us and our sheep all the time. They ambush us in the valley, they cover their faces, are armed with guns and metal pipes to which they attach knives.

On Thursday morning August 4, 2016 at 8:30 am, my brother and I were herding our flock in the valley about one kilometer east of our encampment. There were about 250-300 sheep in our herd. Then we saw five settlers getting out of a car on the main road, the Allon Road, between the settlement Rimonim and A-Taybah and walking towards us. Their faces were covered. In addition to these five settlers, there were about ten other settlers coming from the mountain, east of where we were, from the direction of the settlement Kochav Hashachar. All their faces were covered.

Three of the five settlers tried to steal sheep and two threw rocks at us and at the sheep. We began to run west, towards our encampment. When they realized that they couldn’t steal our sheep, they started stabbing them. They managed to stab 13 sheep. Three sheep died from stab wounds. The group of the ten settlers waited to receive the stolen sheep. We recognize the settlers and can identify them. They’re 17-30 years old.

We called our family, and all our relatives and neighbors came to the valley. At this point, the settlers began to run away, the first group of five fled towards the second group of the ten settlers, who were on the mountain. On the way they set fire to a field.

My brother called the Palestinian DCO. A military jeep happened to pass and saw the fire and the group of settlers. The jeep drove up to the mountain and apparently called the fire department and the police, which arrived 15 minutes later. We took our wounded sheep up to our plot. Police officers photographed the sheep and said that they couldn’t go down to the valley to see the dead sheep and told us to bring them. We refused. One of the policemen, maybe a tracker, followed the trail. The police officers took testimonies from my brother and I and had us sign our testimonies.

On April 9, 2017, the police informed Yesh Din that it had closed the investigation file on the grounds of “perpetrator unknown”.
Silence is Golden