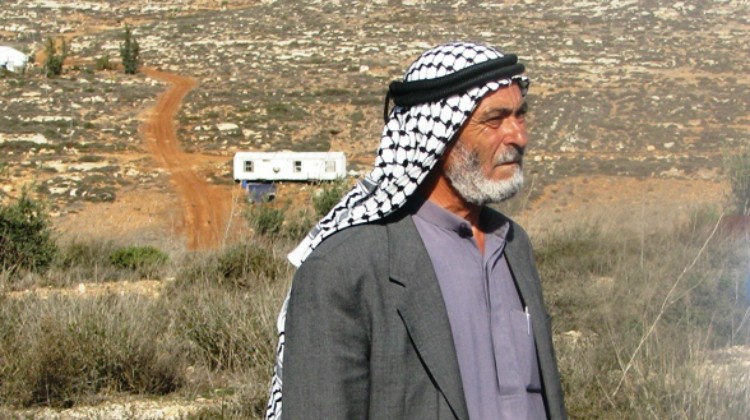 I live in Turmusaya, I’m a farmer. I own hundreds of dunams east of the village with another family. The plot I’m referring to is 10-15 dunams, it doesn’t have any trees, we use it for seasonal crops.

Since 2006, the settlers of the outpost Adei Ad, which was built 300 meters east of the plot, have attempted to plow the plot and take over it. At the end of 2006, they brought bulldozers and tractors. I filed a police complaint through Yesh Din and at the time we managed to remove the settlers and continue to farm the land.

A few months later, the settlers attempted to plant grapevines on my land. I filed another complaint and prevented them from planting. I want to note that my being able to access to my land depends on coordinating and receiving a permit from the Israeli DCO. Usually, we receive a permit for just a few days during the harvest season and for two days during plowing season. We manage to plow but not plant. Last time I saw the plot about a year ago during plowing season, there was nothing was out of the ordinary.

This year we managed to coordinate with the civil administration to plow the plot twice: on April 2, 2012 and on April 4, 2012. When I got to the plot on April 2, I discovered that the settlers had strewn construction waste and trash to interfere with the plowing. I went home to the village without being able to finish cultivating the soil properly.

I want to file a police complaint in this case. I want to plant and raise crops on this plot, but the army prevents me from doing so. Because of fear of the settlers, I sneak into my plot when I have permission. I’m certain the army won’t prevent the settlers from harassing me.

On August 23, 2012 the police closed the investigation file due to “offender unknown”.
Silence is Golden