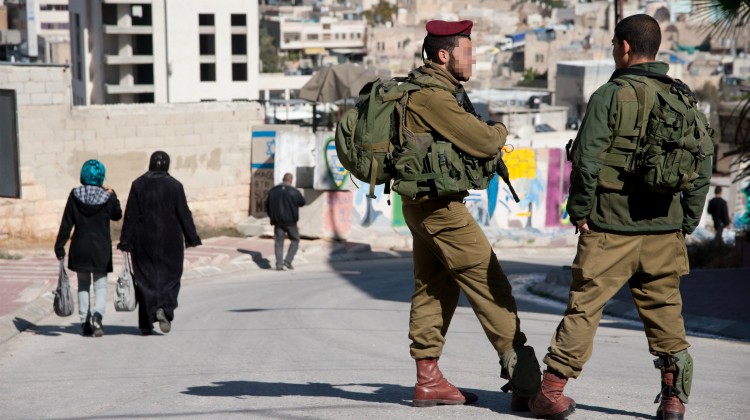 Our house in Tel Rumeida is located on a slope, surrounded by grape vines. The Jewish settlement caravan is just above our house. The caravan was established about ten years ago, about five families live there, including the M family and the A family. Our house is separated from the caravan by a dirt road about two to three meters wide, this road leads to the main road.

About four years ago, the settlers built a playground on the dirt road between our house and the caravan – swings, a merry go round and the like, and blocked our access to the road. The settlers prevented us from going near it. After a legal struggle with the assistance of the Association for Civil Rights in Israel, in March 2005 the court ruled that the road be opened. The army arrived with a court order and unblocked the way. The children started walking on the road, which was now open. After the soldiers finished, there were parts left over, metal bits, waste from the playground structures and rolls of barbed wire.

On Wednesday March 23, 2005, I was at work, about a kilometer from home. My neighbor came to tell me about what happened to my son YA. It took me ten minutes to get home. When I did, a policeman who was there asked me whether I wanted to file a complaint and I said yes. The policemen took my son and I to the police station in Kiryat Arba. There they took my son’s testimony. They didn’t take my testimony.

On Wednesday at 5 pm, I went to the dirt road above our house with my cousin, who is 7 and my neighbor, who is 12. There were three soldiers and when they saw us, they ordered us to clean up the parts left over from the settlers’ playground and the rolls of barbed wire that barricaded the road. The three soldiers left.

We started moving the barriers, we pushed really hard to move what was left of the slide, an olive tree trunk and rolls of barbed wire. We worked for about 40 minutes and then another soldier, who was about ten meters away from us, called us over and asked us why we were moving those things. We said that the three soldiers who were here earlier told us to.

Just then, a woman from the A family arrived, a settler who lives in the caravan. She drove up in her white Subaru station wagon, got out of the car and began cursing Allah and the Prophet Mohammad. One of her three children got out, and her two other kids, who were 2-4, stayed in the car.

She picked up stones and started throwing them at us. The two other children who were with me ran away, and I tried to too, but I got scratched by the barbed wire that blocked my way. I tried to run behind her car, but the woman was faster and grabbed me by my shirt and pushed me up against a wall. The soldier who was there intervened and tried to separate us, but she pushed him back and the soldier’s leg got caught on the barbed wire and he fell down.

She grabbed me with one hand, and then bent over and with her other hand quickly picked up a rock, put it in my mouth, and forced my mouth shut and pressed my face to make sure my mouth stayed shut.

Two of my teeth were broken.

An indictment was served against the settler YA for assaulting a minor with a racist motive or hostility against a person.
On March 14, 2011, the Jerusalem Magistrates Court acquitted YA of the charges brought against her. The main explanation for her acquittal in the ruling was due to the difference in the children’s testimonies (aged 10 and 13) who were present.