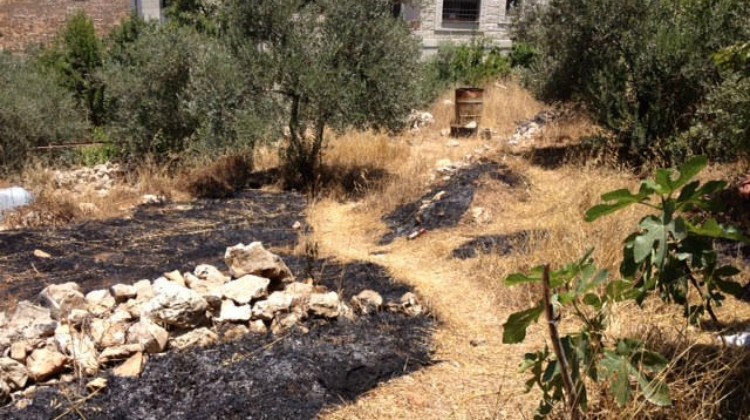 I live in Dura al-Qar’, I’m married and have three sons and a daughter, the oldest is seven and the youngest is one. We live in a neighborhood called Dahiyat al-Zaraa’a in east Dura al-Qar’. Our building has three floors – the basement where my brother and his family live, the first floor where my mother lives, and my family, my other brother and I live on the top floor.

Our yard borders one of the settlement Beit El’s neighborhoods. We have suffered from this for years, since the Oslo Accords, from settler violence. In the past few years, settlers threw Molotov Cocktails at our house four times. Two years ago, they torched my brother’s car and last year they burned four cars that belonged to the neighbors and sprayed slogans on the entrance to the house, which we still haven’t removed [a complaint was filed with the assistance of Yesh Din]. They constantly throw rocks, so we’ve installed grates on the windows.

A year ago, settlers set up a mobile home on the border between the settlement and us, by the Yeshiva. Since then, things have gotten worse. Young men from the yeshiva throw rocks and they’ve broken windows. We gave the police photographs. They come during the daytime and at night our life is a nightmare. The children are afraid to play in the yard. Things are so bad that my wife is trying to convince me to leave our house.

On Monday June 22, 2015 at 11:15 pm I was sitting in the living room watching television. Suddenly I heard a noise and shouting from outside. I immediately went outside to see what happened. Our neighbor also came out. His wife noticed a fire in our backyard. I saw the fire in our backyard and started putting it out with water. Luckily, we have a facet in our yard. The fire damaged two trees before we managed to put it out, otherwise it would have spread towards the house, which is 5-7 meters away.

After we put out the fire, I saw two Molotov Cocktails made of Goldstar beer bottles that hadn’t exploded.

We are frustrated that authorities have not dealt with incidents in the past and so I didn’t report this to the police. When Yesh Din’s team came the following day and we went over to the yard, we saw another Molotov Cocktail.

On May 10, 2016 the police informed Yesh Din that it had closed the investigation file due to “lack of public interest”.
Silence is Golden