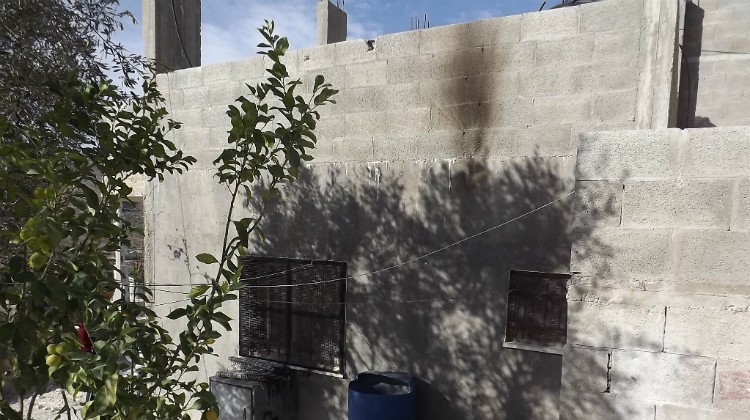 I live in Burin, I live with my wife and our three children who are 5-10 in a single story house at the edge of the eastern neighborhood in the village. The house is on a slope, and the outpost Givat Ronen is on the hilltop approximately 700 meters north-east of the house. We have lived here for 2.5 years.

The neighborhood residents suffer from settler violence regularly, they come over to the neighborhood and throw rocks at the house. We live in constant fear. Sometimes I want to go out with my family for a picnic by our house but then settlers come and throw rocks at us and curse us, and often soldiers come and drive us away instead of the settlers.

On Monday November 25, 2013 at 10 pm I was sitting doing homework with my children and at 11 pm we finished, and the kids went to bed. My wife and I stayed up. A little while later, a bit after 11 pm, we heard a noise from outside, but we didn’t get upset because almost every night soldiers come and walk around the neighborhood. I told my wife it was probably the soldiers doing their “routine” activity.

At around 11:20 pm, we heard massive rock throwing at the house, and judging by the noise it sounded like a large group of people throwing rocks. I asked my wife to call her parents who live in the village.

While my wife was on the phone, I saw fire coming from the kitchen window. I went over and closed the open window. My wife started shouting, the kids woke up and were in shock, they were scared and stressed out. My wife called the village fire department. I was afraid to open the door and leave the house, I went into the bathroom that is by the kitchen, and from the bathroom window I saw a huge fire climbing up the eastern wall of the house. I heard people, but it was dark so I couldn’t see them. I was especially worried because there’s a gas tank on the wall under the kitchen window and I was worried it would explode.

At a certain point I opened the door and left the house, my wife’s parents were there, my brother-in-law and the neighbor all arrived. My brother-in-law and our neighbor put out the fire with a water hose. The gas tank was unharmed and only a plastic mat that was just by it was partly burned.

Luckily the house wasn’t damaged, but the damage to our children – the fear, shock, lack of security and lack of protection – these are all more significant. I work as a nurse in the hospital in Salfit, I work night shifts and I’m worried about my wife and kids who stay home alone.

Our neighbor who works for the Palestinian Authority called and reported the incident to the Palestinian DCO. At around 2 am, four military jeeps arrived with soldiers, a forensics team and one police officer. The officer asked me for my ID, wrote down my information and took my testimony there. The forensics team checked for tracks and collected glass and rocks in plastic bags. The officer told me they were dealing with the incident and said I should go to Ariel Police to file a complaint. At 2:45 am they left and said they’d return in half an hour.

At around 3:10 am, the soldiers came back with a Shin Bet officer, apparently the officer in charge of the area, he took my ID, wrote down my information and took my testimony. They left at 3:30. Before they left, the Shin Bet officer said, “Now you can feel secure and go inside.”

When the sun rose, I examined the signs of the incident. I found signs of soot on the top part of the eastern wall above the kitchen window; signs of fire under the kitchen window; a plastic mat that was partially burned; there were rocks and pieces of glass on the ground in the area; and soot on the southern side of the concrete wall that surrounds the yard. I assume that one Molotov Cocktail hit the top part of the eastern wall and caused a fire under the kitchen window, and a second Molotov Cocktail hit the southern concrete wall.

On March 26, 2014 the police informed Yesh Din that it had closed the investigation file due to “offender unknown”.
Silence is Golden