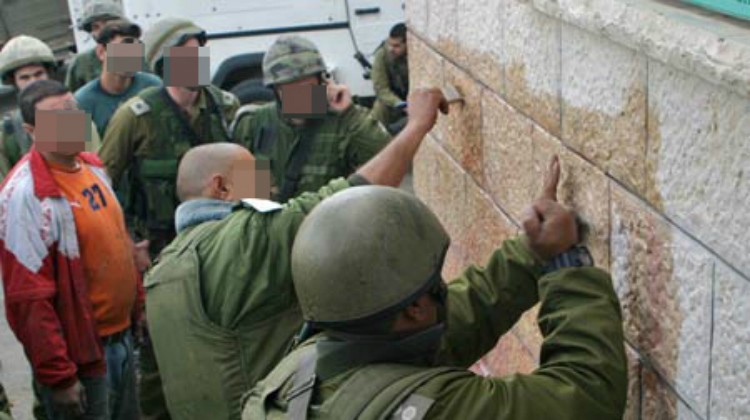 The village of Khirbet a-Nabi Elyas is on Route 55, a main thoroughfare for traffic between Kfar Saba in the west to Route 60 in the east. Most of the village’s houses are south of the road. There are shops on either sides of the road, businesses and mechanics, and many Israelis come to do their shopping, etc. The mosque is on the  village’s west side, approximately 100 meters south of the main road.

I am the head of the village council. For a living, I work at a textile factory I own.

On Sunday February 12, 2006 around 7 am, when I arrived at work, people from my village came and told me there was something offensive written on the mosque wall.

The mosque is very close to my workplace. I started walking towards the mosque and I saw people from the village crowding around outside. There was a Jewish-Israeli guy in the crowd, and he read what was written for the people standing there: “Mohammed is a swine”, because they can’t read Hebrew. The Jewish guy came to get his car repaired. The mechanic knows him. I called the supervisor for religious affairs at the Palestinian Authority in Qalqiliyah. The Palestinian DCO said he would inform the Israeli DCO. I also called up Al Jazeera.

About 15 minutes later, 25 soldiers and policemen arrived and apologized and expressed their sorrow. They said that whoever had done this was probably emotionally unstable. The policemen and soldiers wanted to wash off the graffiti immediately. But the people demanded I leave the graffiti, so the media could document this event. After a while, representatives from the Israeli DCO arrived from Kedumim and from the Palestinian DCO from Qalqiliyah. They consulted with each other. The Israeli DCO officer expressed his deep apologies on behalf of the high ranks of the Israeli authorities, and said he thought we’d better let the army remove the graffiti, to prevent provocation.

A cameraman arrived from Al Jazeera, as well as from Al Manar television network. We don’t have the footage, but it was aired on the internet and in the media. While they were filming, the police took OA’s testimony, the mosque guard.

At 10 am we allowed the soldiers to remove the graffiti and around noon we marched to protest the graffiti.

I live 50 meters away from the mosque. The mosque is on the main road. Every morning at 4:15 am I open the mosque and start preparing it for morning prayers.

On Sunday, February 12, 2006 at 4:15 am I left my home as usual and walked to the mosque. I saw an Israeli car, a white privately owned vehicle, on the main road, 25 meters away from where I stood.

The village center area is lit, so I could make out a person standing by the vehicle. He stood by the car door, on the righthand side. His face was masked (black cloth) and he was wearing a black coat. He was about 1.75 meters tall, medium build. I stood were I was, I was afraid to move. Apparently the man saw me because he immediately opened the car door, got inside and sat in the passenger seat by the driver. The car drove off very slowly, towards the checkpoint at the exit, driving away from the mosque. Once the vehicle drove away, I continued walking to the mosque. I saw the vehicle drive west, towards Israel and stopped in the middle of the road, about 30 meters from the mosque.

I got to the mosque and was about to open the door, and then I saw the writing on the wall. I didn’t know what it said, I can’t read Hebrew. I felt it said something bad. I was scared. I opened the door to the mosque quickly and locked the door behind me. I opened a window overlooking the road, I saw the car continuing to drive west. I stayed inside with the door locked until 4:40 am, and then people started arriving to pray. I told them about what had happened. Nobody could read Hebrew. After prayers, people stayed. In the meantime, the news spread in the village, and more people came to the mosque. Around 7 am, when people leave for work, a Jewish-Israeli guy arrived, he usually gets his car fixed at a mechanic in the village. He translated for us: “Muhammed is a swine”. At that time, the head of the village council also arrived.

On February 22, 2007 the police informed Yesh Din that the investigation file was closed due to “offender unknown”.
Silence is Golden