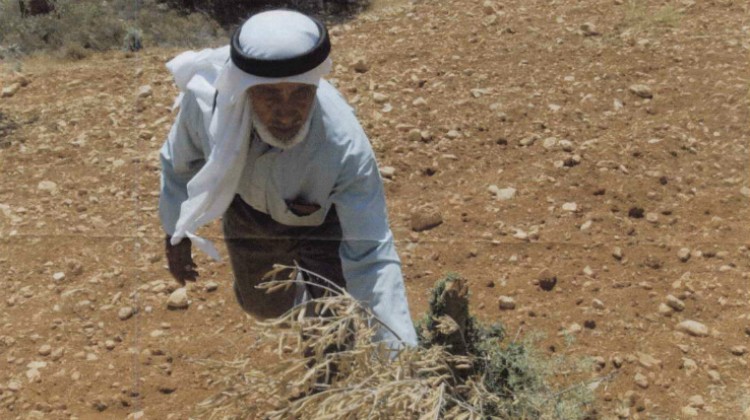 My late brother and I own a plot of land of 210 dunams. The plot is east of Salem in the area known as “Jabel Kabir”, about 3 km from the settlement Elon Moreh, beyond the bypass road (“the apartheid road”) leading to the settlement. We plow this land and plant wheat on it. Since 1975, I’ve planted about 500 olive trees on this land. We farmed this land until the second intifada with a horse and a tractor, without any disruption by the settlers.

Since the second intifada broke out, the army has prevented us from going to those farmlands by not allowing us to pass on the apartheid roads. The settlers threaten us, burn down crops and beat people. That’s why we go to this land less frequently, only to plow between the olive trees. We stopped planting wheat because we are afraid.

On May 15, 2005 four of my sons left to plow the soil between the olive trees on our land with a tractor and a horse. They managed to reach the land and complete their work. We haven’t gone to our land since that day. We heard about the old man S who was beaten on his land in that same area and burning of olive trees, and we were afraid to go to our land.

On Saturday, July 23, 2005 at 7 am, I went over to the plot to see how things were there, together with AA, my relative. When we got there, I saw about two hundred olive trees had their branches sawn off, and some of the younger trees were uprooted.

I called home to tell them about had what happened and left for Nablus. I filed a complaint at the Palestinian ministry of agriculture and then informed the Palestinian DCO and filed a complaint. I also informed two journalists who live in Salem and who write for foreign press agencies about what had happened. The next day, the incident appeared in the media and the internet.

That Saturday at 9 pm, an Israeli officer from the Grizim DCO called me to ask whether the trees that had been uprooted belonged to me. We arranged to meet the following day, July 24 at 10 am at a specific spot on the bypass road.

I went there accompanied by journalists and photographers and several ISM activists who live in our village, together with the DCO officer and another high-ranking officer who is stationed in the area. They took my testimony and recorded my complaint.

We returned to the road. The officer asked me to wait for another military party that was supposed to arrive to investigate the incident and assess the number of trees cut. When the second party arrived, it included police officers, they didn’t take me with them, they took my son AA, and drove to the grove in their jeep.

The journalists, ISM activists and I walked quickly on a shorter dirt road and reached my plot before the police did. We photographed everything, and my escorts left quickly before the policemen and my son arrived.

We got home around 9 pm. The head of the DCO in Huwarah called me and asked whether I wanted compensation or just to file a complaint. I told him I wanted my full rights. What was done to me today could be done to others tomorrow. That’s why I want the criminals brought to justice.

No one has contacted me since, even though half of my olive grove was cut down, and I haven’t gone to farm my land because I’m afraid.

On Sunday, July 24, 2005 around noontime I was with some other people on the road leading to the settlement Elon Moreh. We waited for the police, who were supposed to arrive to investigate the tree cutting on my family’s land.

When the policemen arrived, they asked me to escort them to the plot instead of my father. There were three policemen. I don’t know them. They refused to take my father or any of the others who were with us.

We rode in the jeep until we reached the path to the olive grove. From that point on, you have to walk. When they heard me say it was about 300 meters to the plot, they decided that we’d wait there until the army arrived. Apparently, they called the army too. We waited there for almost an hour. After an hour, an army jeep arrived with four soldiers. I don’t know them, and I don’t know what ranks they had. My father, who took the path, got to the plot before we did. When we got to the olive grove, they began counting the trees one by one but before they had finished, they said they were in a rush and out of time. They managed to count 90 trees. They only counted the large trees. They didn’t count the small ones.

My land borders Jamil’s land. We go to our land together, also as a defensive measure, especially since the old man S was beaten.

On Saturday June 23, 2005 at 6 am, Jamil came to pick me up on his way to the plot. When we got to our land, I was horrified. We saw many olive trees sawed and cut down and younger trees uprooted. We walked around our land and then left. Jamil went to Nablus from there.

On August 9, 2005 the police closed the investigation file due to “offender unknown”.
Silence is Golden