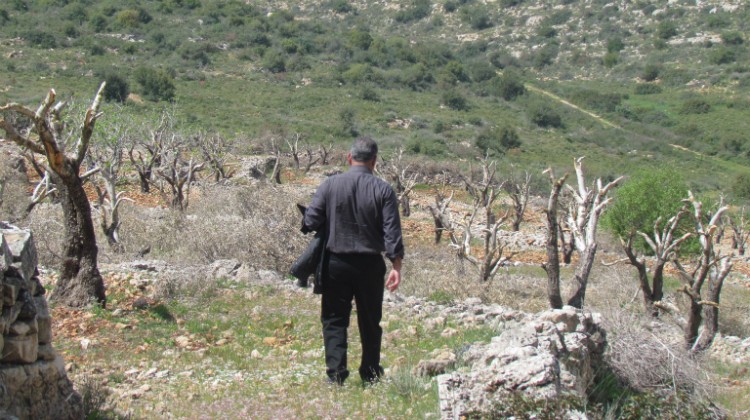 I live in al-Mazra’ah al-Qibliyah and own 150 dunams of farmland, five km north-west of the village. My land is south of the settlement Nachliel, two hundred meters from the settlement fence. I inherited this land from my grandfather, it belonged to my father and now to me. There are trees on 100 dunams of my land, about 1,000 olive trees that are 70-100 years old. An additional 50 dunams are used for planting seasonal crops. We have free access to the land with no need to coordinate with the army. Over the past decade we have been suffering from settler violence, which has hurt our farmer neighbors: cutting down trees, physically injuring farmers, breaking branches, driving their ATVs among the trees.

Most problems occur during plowing and harvesting season, when farmers go to their land. My father filed a police complaint eight years ago. Nothing came of it and he lost faith. I haven’t filed a complaint yet.

On March 1, 2013 my brother and I decided to take our kids plowing. We left home at 5 am and arrived at 6. You can’t go by car or by tractor, you have to walk. We took donkeys and a horse.

When we arrived, I was shocked to see that hundreds of trees had been damaged. Whoever did it had sawed the bottom of the trunks and also broke the branches, which causes long-term damage to trees. Last time I was on my land was in November, during the olive harvest. On the last day of the harvest, settlers stole our harvesting equipment. But the trees were fine.

I counted the trees that had been harmed: 300 trees! The branches on some of the trees were already dry, attesting to an “old” cutting. In other places, the branches were still green: new cutting. Meaning, this was going on for a while. Harming the trees this way will require I think at least six years to rehabilitate the trees.

There’s an army watchtower at the entrance to the settlement and it’s unlikely that they didn’t see the settlers. There’s also a camera in the watchtower that probably captured them in action. I immediately notified the council, which alerted OCHA, who came to my land today to see what happened.

From what I saw, there’s no additional damage other than damage to the trees. I estimate that the 300 trees would have produced about seventy containers of oil per year. Every container costs about ILS 600, so the loss is thousands of ILS over time.

I intend to file a complaint at Sha’ar Binyamin Police.

On March 23, 2014 the police informed Yesh Din that it had closed the investigation file due to “offender unknown”.
Silence is Golden