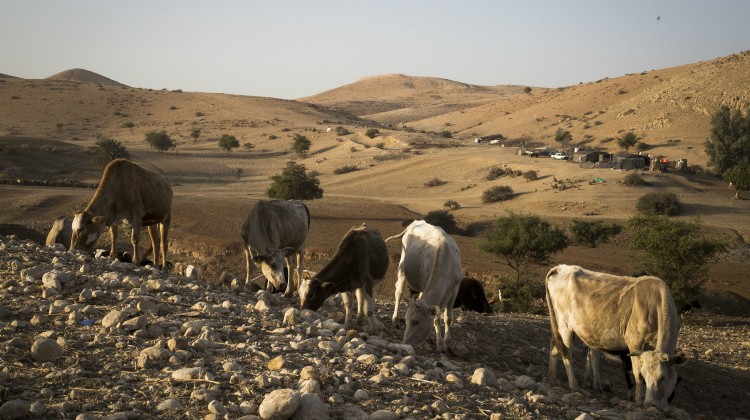 On the day of the incident I was herding the family’s cows. Q, my cousin was with me. There were other herders from the area around, but they were far away. It was about 3-3:30 pm. The cows were 150-200 meters away from us. We could see the herd from where we were. Suddenly we saw a car coming from the direction of the settlement Petza’el. It was a kind of a gray color – that’s what it looked like from far away. At this point we stopped seeing the car but then we suddenly heard shooting. When we heard the shooting, we tried to figure out what was happening, and then we saw the car we had noticed earlier parked by the road, close to where the cows were grazing. One man got out of the car and the other stayed inside. That’s how I understood they were the people who had shot, but I didn’t think that they shot our cows, I thought they had just shot at a rock or something. I remember they shot close to ten bullets.

At that point, we saw the car drive back towards the settlement Petza’el. A few moments passed and we didn’t know what had happened until Q and I went over to our herd, and only then discovered that two of our cows had been shot. Q phoned our family. We stayed where we were and then suddenly a black Magnum with a trailer appeared. It tried to go the area of the shooting, but when the driver noticed us, he was surprised and turned around and drove back towards Petza’el. I know the Magnum belongs to someone called A from the settlement Petza’el. I know it because my relatives told me. This car is known in the area and everyone knows it belongs to the settler A. After that, people from the village came and the police and the army came too.

Fasayil al-Fauqa is a Bedouin settlement located about 1.5 km west of route 90, south of the settlement Petza’el and east of the settlement Ma’ale Efrayim. Its residents are originally from the Yatta area and Bethlehem. Most are herders, but some work in agriculture in the settlements nearby, mainly Petza’el. Fasayil doesn’t have any infrastructure and residences are mainly tents and tin shacks and structures built of mud brick. Working in agriculture is arranged through middlemen. A worker earns ILS 65 per day and the rest of the salary goes to the middleman.

Our family has a lot of experience with settler harassment. Most of the problems here are with cows grazing. The Israel Nature and Parks Authority, the Green Patrol and the settlement security from Ma’ale Efrayim do most of the harassment. I heard that the cows were killed in order to sell the carcasses to the many Thai workers who are employed in the area, for food. The incident was while my 13 year-old son was herding the cows.

We’re from Yatta originally, but we moved to Fasayil because of water and grazing. In the summer, we migrate to an area close to Nablus for grazing land and water. My brother B and I have a herd of 15 cows. We make our living from their milk and from cheesemaking. My sons and nephews mainly herd the cows. The grazing land is close to our settlement. In the past, they shot part of my herd [a complaint was filed in 2008 with the assistance of Yesh Din], and on another occasion, cows were poisoned by poisoned dates. That happened when we settled by Qusin near Nablus.

On the day of the incident, June 23, 2010 at around 3:30 pm I got a phone call from my nephew, who reported that a settler from Petza’el shot our herd and apparently killed two cows. I immediately drove over to where the children were, to find out what had happened. I got there at 4 pm. I drove insanely fast, because I felt that my source of income was threatened. When I got there, I found four army jeeps, two police cars and two cars belonging to local [Israeli settlement] security. There were also settlers there, observing the incident.

I parked my car close to the site of the incident and my brother and I went over to see what had happened. The soldiers tried to prevent me from going over there. One of the police officers who recognized me from previous incidents knew I own the herd and asked the soldiers to let me pass. I saw that one of the cows was dead and the second was dying. Its leg was broken and there was a bullet wound in its jaw. It was shot six or seven times. It was a very difficult sight. The soldiers who were present, most spoke Arabic as a mother tongue tried to calm me, saying, “It’ll be okay, don’t take it to heart.”

When I arrived, I didn’t see my children and I discovered that the army had made them move away. One of the soldiers, a border police officer named H, was willing to identify himself and introduced himself as one of the border police officers in the area. Another officer, T works for the civil administration in Jericho. While I was talking to the soldiers and listening to the details, one of the soldiers asked me, “what do you have against the settlers?” I answered, “Nothing”. “Then why are they causing you so much trouble?” And then T said, “Come to the civil administration in Jericho tomorrow and we’ll compensate you for the previous incident as well.” They told me about an incident in which a female camel was shot by Tayasir, and claimed that in that case, the army paid damages to the victim. While we were talking, of course I didn’t know who had shot the cows.

While we stood by the dead cows, the police and army searched for bullets and the forensic evidence technician came to comb the area, he collected bullet casings and measured the area. He also photographed a bullet that hit a cow but then somehow continued and was lodged somewhere else. The officers asked me to go to the police in Ma’ale Efrayim and file a complaint. One of the police officers asked to take my testimony, took my phone number and ID number, wrote down my testimony and claimed, “This is your complaint.” Finally, the sent me on my way and noted they would call me if they required additional information. I haven’t heard anything since.

I called officer T several times, after he claimed I would receive compensation for the damage, but every time I called, he gave a different excuse, such as “I’m not in my office”, and so on.

At a certain point, while the army was still at the site of the incident, the children appeared – my son and my nephew and another witness named KJ. I discovered that the police had taken their testimony there. That’s how I understood that my son and nephew were 100-150 meters away from the herd and suddenly heard shots and saw two people approach the cows. One did the shooting and the second accompanied him, and close by, on the road, a car was parked. Once they finished shooting, the people got into the car and drove towards the settlement Petza’el. When the kids went over to the herd, they discovered the two dead cows. Minutes later, a Magnum [vehicle] with a trailer appeared. Apparently, they came to pick up the carcasses. The vehicle driver was surprised by the presence of people by the carcasses and quickly drove away towards the settlement Petza’el. I guess they assumed that the herd was grazing unsupervised, and once they saw the kids, they realized they were wrong.

I know other people whose cows have been shot, especially by ‘Aqraba, and it’s rumored that the carcasses are sold to Thai workers. My son and nephew told the police that they think the Magnum that came to load the carcasses belongs to the son of the settler A from Petza’el, who is known in the area. The kids also testified that the car the shooters got out of resembles the settler A’s car, he has two cars and an SUV.

On December 28, 2010 the police closed the investigation file due to “lack of evidence”.
Yesh Din’s legal team reviewed the police investigation file and found that during the investigation, intelligence led the investigators to AS, a settler from Petza’el, who admitted during an “informal” investigation to having committed the offence. In this investigation AS explained that “it is possible to shorten the proceedings, and that he had shot the cows”, that “He does not like Arabs” and “he educates them”. In addition, the bullet casing found at the site of the incident was found to match AS’ weapon.
On April 14, 2011, Yesh Din’s legal team submitted a detailed appeal, claiming the existence of a foundation of evidence that requires serving an indictment against the settler AS.
On December 12, 2011, the State Attorney’s Office rejected the appeal and decided that there is insufficient evidence for criminal proceedings.