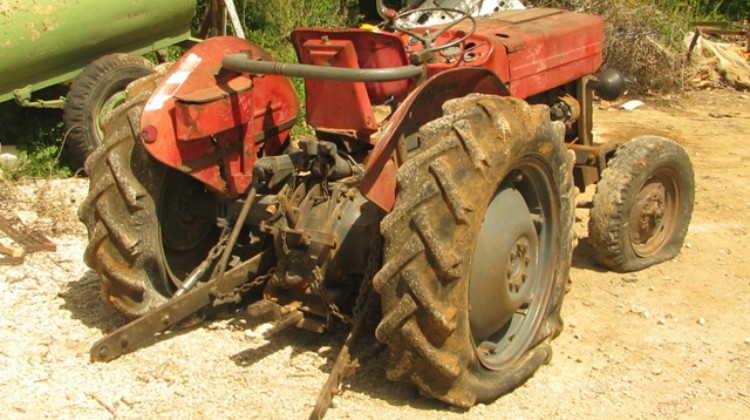 I have a tractor with a plow, and I offer my services for plowing plots in Qaryut, which is about four km east of route 60 and 18 km south of Tapuah Junction.

On Saturday morning, April 18, 2009 I was plowing RA’s plot, west of the village, in an area called Batisha. I worked there from eight to nine am and when I finished, I called MA, whose land is nearby, because we arranged that I’d plow his land when I finished at RA’s land, who had gone home. MA drove over, parked his car and joined me on my tractor. We drove for three-four minutes towards his plot. There’s a steep incline on the way to his plot, and then a sharp turn left, so we were driving slowly.

Suddenly I felt MA grab me and pull me and then I saw a settler holding a big knife, a commando knife with a 30 cm blade. By the left turn there’s a large olive tree, which blocked my view of the settler approaching. I swerved left, the settler turned right and plunged the knife into the right back tractor tire. I saw there were already two stab marks on the left tire which I hadn’t noticed, probably because of the tractor noise.

MA and I got back on the tractor and managed to drive for just a few meters until the tires deflated completely and the tractor was out of order. We stopped and got off. I called the head of Qaryut’s council. He told us to wait there until the DCO and police arrived. After about 1.5 hours, a DCO officer arrived. We told him what happened, he photographed the tractor, and then we walked with him to the site of the incident to check for footprints. He photographed there too and told us to go to the police to file a complaint, and then he left.

We brought got a tow truck and drove home. The damage to the tires is ILS 3,000. Description of the settler: tall, thin, wore khaki pants, tall shoes, black shirt, he was masked in black, and only his eyes were showing.

I received confirmation for filing a complaint, but not a complaint number. There’s a lookout tower just by the site of the incident equipped with cameras.

I live in Qaryut and I own about 1.5 dunams of land with around 40 Roman olive trees, ancient trees. I inherited the plot, I plow it once a year, I hire a worker with a tractor.

This year I hired SH. We’d arranged the day before that he’d come plow my plot, he told me he was going to plow RA’s plot, and we agreed that we’d meet there when he finished and ride over to my plot.

SH called me at 9-9:30 am, and I drove over. I arrived about 15 minutes later, parked my car, met SH and got on his tractor and sat to his left. We needed to climb a hill in order to reach my plot, it can’t be reached by car.

We drove for about four minutes and started the ascent, there’s a left turn and because of the rough terrain we were moving very slowly. On the left, there’s a large olive tree. Suddenly on my right I noticed a settler with a knife 30 cm long. I was afraid he would stab SH. SH hadn’t noticed the settler, so I hugged him, to protect him. At that same moment, the settler sank his knife into the back right tire, his knife got wedged in the tire, and then I saw him grasp the knife with both hands and pull it out.

We got back on the tractor and tried to drive back to the village, but after about one hundred meters it wouldn’t move. SH called the head of the council, who told us to wait there until the DCO arrived. About 1.5 hours later, a DCO officer arrived, he photographed the tractor and then the site of the incident and told us both to go file a complaint at the Huwarah Police.

The next day, I went to file a complaint with SH, the officer asked whether I had any damage to report, I said no, I didn’t but I was an eyewitness to the incident, but he decided there was no need for me to testify.

On June 10, 2009 the police closed the investigation file due to “offender unknown”.
Silence is Golden