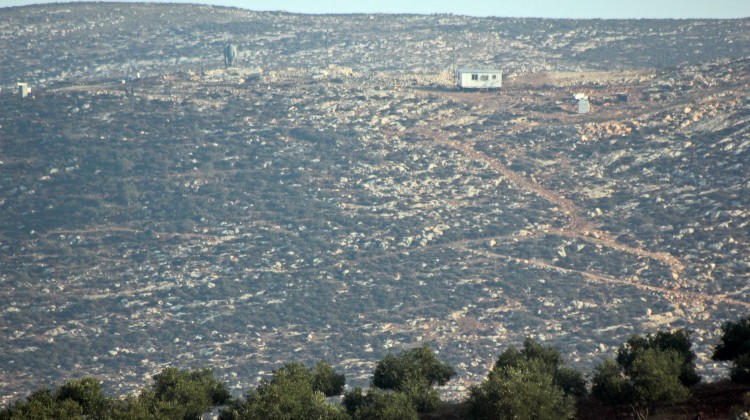 My family’s house is close to the council, on the interior road that crosses Beitin. The house is two stories high and built of stone. At the entrance to the left, there is a patio covered by a grapevine (now its fall), where two lights hung. The patio leads to a car garage, which has shutters.

Only my wife and I live at home now. Our children live separately, and several of them live in the US.

By the village, on a hill, there is land that belongs to five families. It’s farming land with several empty farming building that the settlers invaded and called it Givat Ha’Or outpost.

On February 17, 2008 at about 8:30 pm, we were at home drinking coffee. Suddenly we heard a loud noise. We were scared to go outside and see what happened. It was clear from the noise that there was a large group of settlers outside. They threw rocks at the house, hit some of the blinds, broke both lamps that hung at the garage entrance and the patio was filled with rocks. We started phoning friends in the village. It took them about half an hour to gather and come over, and then the settlers fled. In addition to stoning our house, the settlers also hit a car parked nearby. The car belongs to people from a different village who came to visit family that day. Usually I leave my car parked outside by the house, but luckily this time I parked in the garage and so it wasn’t damaged.

In the meantime, while our house was being stoned, we called the police, and it arrived after 25 minutes. An officer spoke with us and photographed the patio that was full of rocks. The policemen questioned me about the incident and then suggested we go to the police station to file a complaint and give our full testimony. At about 11 pm we drove after the policemen to Binyamin Police, and I gave testimony in Arabic. I wasn’t given any receipt of the complaint I filed. The officer explained that I don’t have the right to protect myself from rioters, I must call the police every time such a thing happens. He also told me they pursued the settlers and arrested 11, but the next morning they all were released. We, of course, are constantly afraid that they will come back to harass us.

In November 2008, following this complaint and additional complaints filed by the residents of Beitin regarding similar violence, the State Attorney’s Office served several indictments against settler minors for trespassing and establishing the outpost “Givat Or” on the village’s land. The hearings were held behind closed doors in juvenile court.
Silence is Golden