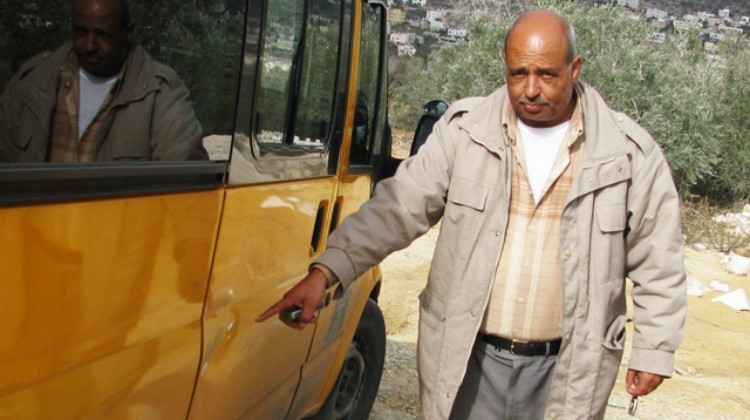 I live in Salfit, I’ve worked as a taxi driver for the past few years. Mainly I drive the Salfit-Ramallah route, I leave home at around 6:30 am and get back at about 6:30 pm. The period before the holiday is very busy, and I make special trips in addition to the driving the regular route.

On Thursday December 4, 2008 at 2 pm, I drove seven passengers from Ramallah to Tulkarm. At 3 pm I arrived in Tulkarm, let off the passengers and drove back to Salfit alone. On route 60 between Tulkarm and Jit Junction, about two km before the junction, I saw a group of at least 15 settlers on the mountain slope west of the road. They were approximately ten meters away from the road, they walked down from the settlement Kedumim. There were male and female settlers in this group, 17-25 year-olds. The entire group began throwing rocks at the taxi, I continued driving and even sped up, but still four-five rocks hit my taxi. I was afraid for my life more than I was concerned about the taxi. If I had stopped, they would have killed me. I didn’t notice anything else about them.

One rock hit the roof of the car on the windshield frame, denting the roof and causing the windshield  to shatter, and as a result my hand and leg were scratched mildly.

I kept driving to Jit Junction, there were two police cars and around three-four army jeeps there. There were a lot of forces inside the cars and standing outside. I stopped by the soldiers at the junction, I didn’t get out of the taxi, and told them what had happened. The soldiers saw the damage to the taxi and told me they would go take care of them, the settlers. The soldiers instructed me to turn right towards Kedumim. They closed the road to Nablus. After I turned right, I saw a group of Machsom Watch women. I felt safe and got out of the taxi. We saw all the damage: in addition to the broken windshield and the bent roof, there was a dent on the body and scratches on the passenger’s door, and a dent and scratches on the body on the driver’s side.

On Saturday I reported the incident to the Palestinian police in Salfit.

I replaced the windshield and repaired the roof, it cost ILS 1,300. The rest of the repairs cost about ILS 500. I had to miss three days of work due to the damage.

On December 14, 2008 I filed a complaint with the assistance of Yesh Din. I gave the investigator a disc with photographs of the damage.