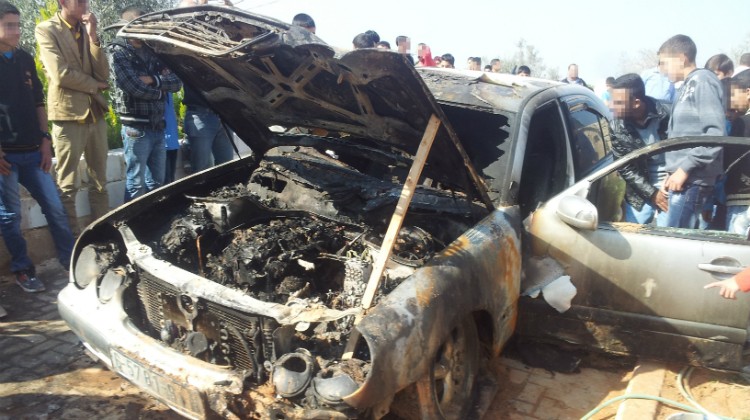 BS, 28, married and a father of one daughter, Far’ata

I live in Far’ata, I’m the breadwinner, I live in the eastern neighborhood half a kilometer from the center of the village. The outpost Havat Gilad is one km east of my house.

I’ve lived here for a year and a half and we suffer from settler violence daily. They come all the way up to the houses in my neighborhood, torch trees, throw rocks and steal livestock. A year ago, they stole a heifer from my father, last July settlers came to my yard in the middle of the night and punctured the tires of my car.

On November 19, 2013 at around 3 am I woke up from loud noise and the sound of glass breaking. I also heard my neighbor yelling. I got up immediately, got dressed and went outside. I saw flames coming from my car, a Mercedes, parked in the backyard. The fire also started spread to my truck, which was also parked in my yard. It was a very strong fire, and I went towards the hose in the garden and with my neighbor tried controlling the fire. It took us half an hour before we managed to put out the fire, but unfortunately the car was almost completely burned, and the truck was partially burned.

I immediately called the head of the village council and notified him, he contacted the Palestinian DCO and the Palestinian DCO transferred the report to the Israeli DCO. A military jeep arrived at around 3:40 am. The soldiers asked us what happened, I explained and then they left. The neighbor’s security camera documented three masked settlers who arrived from the direction of Havat Gilad starting the fire. Unfortunately, because it was dark and the arsonists were masked, they can’t be identified. They also sprayed a Star of David on the fence.

At 10:30 am, a lot of army, border police and Israeli police forces arrived, as well as a man from the Shin Bet. The police officers took testimonies from my neighbor and I, photographed the damage and took fingerprints. They also took the footage from the security camera.

This was a very difficult and scary incident. My wife was asleep and woke up from me shouting, she’s in shock. I still can’t grasp this, it was only a few months ago that settlers came and punctured my tires, but this blow is more painful. In this case, the damage is huge, it’s ILS 80,000 but the larger damage is emotional, and the sense of helplessness and insecurity in my own home, I’m scared they will come at any moment and burn down our house while we’re inside, especially since they did this two days ago in a different village.

Unfortunately, the police and the army and all the security people don’t do anything to the settlers, they don’t arrest them or bring them to trial, that’s why they continue terrorizing.

I accuse the State of Israel for everything that has happened to us because they don’t deal with these criminals seriously, the settlers attack us day and night and there’s no law enforcement, they’ve taken over village land and built an illegal outpost and still the State of Israel does nothing.

I don’t know what will happen in the future, but I’m scared that one day they’ll kill us in our home and then maybe the State of Israel will wake up. I want to ask the Israeli security forces responsible – as they claim – for security in the area: what they are doing and how they would behave and treat an incident if it were us going to a settlement and burning their cars or attacking them?

I just want to live quietly and respectfully and feel safe in my own home, that’s every person’s fundamental right.