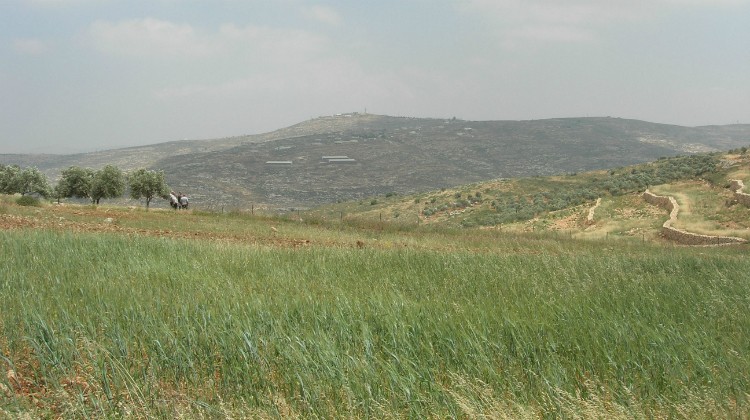 I was driving in a 1995 Mitsubishi with my two friends H and J. We were driving inside the village at about 8:30 pm. It was dark and we were driving in the direction of the village of Yanun, on the road connecting the two villages. At the edge of our village there are a few more houses belonging to ‘Aqraba. There’s a hill there were we like to sit. Suddenly a car came from the opposite direction and I didn’t recognize it. He blocked our way and had strong bright lights fixed on the car that blinded us. It was a red jeep with a large fender, like a Hummer.

We stopped our car and then the jeep also stopped, and a settler got out. When he opened the door the interior of his car lit up and we could see he had an M-16 rifle. He had sidelocks, a kippah, he had a medium build, about thirty plus years-old. He wore a sort of apron that had fringes, he had a beard, but I couldn’t identify him. Another person was inside the vehicle.

I put the Mitsubishi in reverse. The driver got back in the car and drove in our direction. When I drove in reverse, there was a taxi with three passengers in it so I couldn’t go any farther. We got out of our car and the taxi passengers said, “Settlers, run”. We were so frightened that we left the car keys inside and ran towards the mountain, west, where there were a few houses.

They started shooting in the air, an ATV and a jeep arrived. Initially, from where we were up the hill, we could see the settlers. One of them, maybe the settlement guard, threw an illuminating grenade and we saw them get into our car and the taxi. They couldn’t start the taxi because they didn’t have a key. They took the Mitsubishi and drove off in the direction of Itamar.

All my car documents were inside the car. After the settlers left, we didn’t dare get near the taxi for a while. After about half an hour, we went over to the taxi and met the driver who also returned, and called the council head, who came to where we were. We told him what had happened, and about an hour later, we called the Palestinian DCO.

At about ten pm, four army jeeps drove into the village. We walked with them to the site of the incident, in the direction of Yanun. There were two officers who spoke Arabic and we described the incident to them. They suggested we go to the settlement of Itamar. We declined and said, “We aren’t going to Itamar.” They suggested we go to the Grizim DCO (Nablus) the next day. I think some of the military jeeps went to look for settlers in the direction of Itamar. At about midnight, the army left.

The next day, I went to the DCO officer with my friend H. I went in alone to file a complaint. I described the incident. There was nothing special, and we got a receipt.

Settlers never stole cars from us or torched anything of ours before. The next day, H and I rode around looking for the Mitsubishi. I took my father’s car, and on the old road to Nablus we found a completely burned car, not even the steering wheel was left. We’re not allowed to drive on that road, but we did anyway, and when we saw it, we made a u turn.

On January 3, 2008, the police informed Yesh Din that the investigation file had been closed due to “offender unknown”. Review of the investigation file revealed that besides taking the victim’s testimony and making several phone calls to him, no further investigative action was taken in this case.
Yesh Din’s legal team appealed the decision and demanded the investigation be reopened, and the witnesses and possible suspects be summoned to testify before the police at the very least.
On August 31, 2008 the State Attorney rejected the appeal and stated it did not see fit to change the police’s decision to close the file.