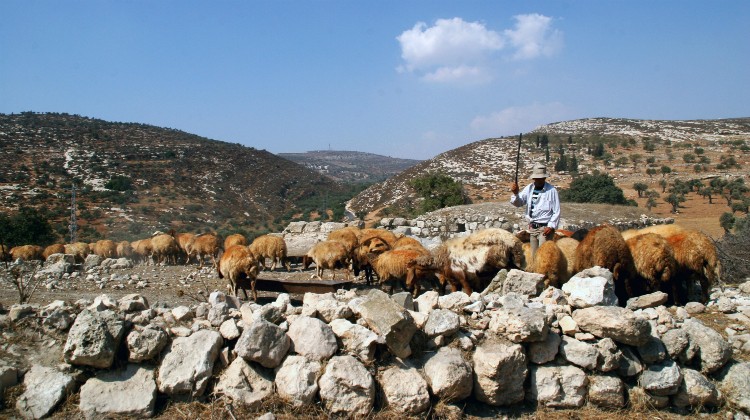 On Wednesday, November 9, 2005 I herded my sheep to my olive grove north-east of Yanun, as part of the ten-day permit from the police to harvest our olives. I walked with my son F.J and the sheep up the mountain towards the olive grove, about one kilometer from the Itamar settlement fence. By the settlement fence there was a settler herding black and brown goats.

Suddenly an armed settler came towards me. I backed away approximately 20 meters, I didn’t want us to have any problems. The settler asked me “What are you doing here?” and got closer. I told him I was on my land, working. He said, “Leave”. I said, “Okay, I’ll leave.” I didn’t think he would hit me or do anything to me. But then he aimed his weapon at my knees, and then raised it in the air and butted my face, my cheek with the rifle butt. Later I discovered I have four fractures on the left side of my nose, below my eye and by my ear. I bled a lot. I fell to the ground and the settler walked off.

I can identify him: he has a reddish-brown beard, a large kippah on his head with small holes like a net, he isn’t especially tall but pretty broad and strong. I think he is about 20.

My son arrived and lifted me up. I was in a lot of pain. My son called the head of our village from my phone. We walked down towards the road and walked for about 15 minutes. The head of our village, RS was waiting by the road, and he drove us to his house. RS called the police and the army and asked them to come. One of the soldiers cleaned my face and gave me first aid. After that, the children’s school bus took me to the infirmary in Aqraba. From there I was sent to Rafidya Hospital in an ambulance. I was hospitalized for ten days and had surgery on my face.

Yesterday, after spending ten days in the hospital I went home. I still feel pain and I can’t go back to work.

On Wednesday November 9, 2005 at 9 am I went with my father to our olive grove, north-east of Yanun, one kilometer away from the village. We took our sheep. I herded the sheep and my father was in our olive grove. We began working and then I heard my father say, here comes the settler. I told me father, “Don’t worry. We have permission from the police to work, so we have nothing to worry about.” I presumed that if we had a permit from the police, the settlers would know about it and wouldn’t dare attack us.

The setter arrived. I moved the flock away, to protect the sheep. I was about 50 meters away from my father and the settler. The setter began talking and arguing with my father. He said, “Why are you here”? My father responded, “These are my olives and I have a permit from the police to work here.” The settler answered: “There is no police! I am the police! These are my olives! My land! You aren’t allowed to be here!” My father said, “These olives belong to me, and before that they belonged to my grandfather.” The settler shouted at my father and said, “Do as I say!” My father said, “Okay, I’m leaving.” I heard them because they spoke loudly, and there’s no noise in the mountains and voices are clearly heard.

The settler was normal sized. Neither thin nor fat. A bit tall, with a beard that wasn’t especially long. Brown-reddish hair. Short. He wore a small red-brown kippah with small holes that looked like a net. He was armed. He had his fringes showing over his pants.

The day before, on Tuesday, the same settler came with his friend, they were both armed and had a big dog with them. This settler hit me above my right eye, and then they both ran away.

My father turned back towards Yanun, and the settler followed him and beat my father’s face with his weapon. My father told me not to do anything, because he was afraid the settler would beat me too. My father asked me to walk back and not help him so I wouldn’t get hurt. I took my father’s phone and called RS, head of Yanun. RS told us to go down to the road, that he would pick us up. He also said he would alert the army and the police.

Father was in bad shape. He lay on the ground. I tried to help him. Once the settler saw me calling for help over the phone and attending to my father, he ran off.

There was another settler herding his goats up on the slope above our grove. His goats were black and brown, he didn’t have any white goats. They met, talked to each other, and the settler herder walked back with his goats towards Itamar. My father and I walked down to the road to RS and he drove us to his house.

Volunteers from abroad came to us, and one of the volunteers took care of my father’s face. After that, the police and soldiers arrived. One of the soldiers took over caring for my father. The police officer talked to me and wanted to talk to my father, but he needed medical treatment first. My father was taken to the hospital in Nablus.

I was taken to the Ariel Police in a jeep. I was investigated. I was asked questions and brought photographs and asked to identify the attacker. I said, “Okay, I’m certain I can identify him.” I went with a policeman to the computer and photos of people began appearing on the screen. Twenty photos every time. Each photo was 1.5 square centimeter. I looked and couldn’t find the settler’s photo, and then came 20 more photos. This went on for about 100 photos, and then I identified the settler who attacked my father. I pointed at him. The policeman called another officer and said the assailant was identified for certain. This settler is someone I recognized easily because he bothered us many times. They asked me, “Are you sure?” and I said, “One hundred percent sure!” They sent me to the Ariel’s gate and from there I returned to Yanun by taxi. I was angry at the policemen, I told them: “You said we had permission to work in the grove and that you would protect us, and just yesterday, on Tuesday, I was beaten above my eye, and today they broke my father’s face!” The policeman said, “Why are you saying you were beaten? I don’t see any signs above your eye.” I can’t identify the settler who herded the black goats and whom I think called his friend to attack us, because he was far away. But he did have a brown dog.

On March 7, 2006 the police closed the investigation file on the grounds of “lack of evidence”. After reviewing the investigation file, Yesh Din appealed the decision.
On February 3, 2008, the State Attorney’s Office rejected the appeal, claiming that despite the fact that the victim’s son identified the suspect in a photograph line-up, “There is not sufficient evidence with the level of certainty required for a criminal proceeding” to try the suspect.