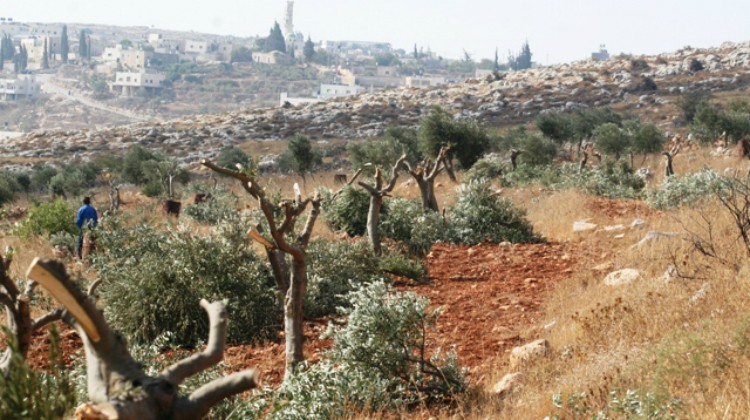 This land belongs to my family. It is my brothers’ and mine. It is called al-Rafid and is north of Allon road and about 200 meters north of the road leading to the village. We own ten dunams, with 200 olive trees and twenty fig trees planted forty years ago. Because our land is nearby, we are there every day. We tend to the trees, water them with water we bring on donkey, clear rocks from the soil and pick figs.

Several months ago, settlers from the outpost Adei Ad set up two mobile homes on the top of the mountain, around 300 meters from our land. The police and army evacuated them twice, but they returned. We filed complaints several times.

On Friday, September 4, 2009 my entire family went to our plot at 5:30 am, after we received a phone call from a herder who informed us that our trees had been cut down. We were in shock when we saw that all our trees had been cut down, it was like a graveyard for trees. Policemen counted the trees and photographed everything. A DCO officer counted every tree and took photos. I drove with Jamil to Binyamin Police and we filed a complaint. We took a few branches from the cut down trees.

The land I own is 250 meters from Allon road to the west, two km south of the outpost Adei Ad. The land includes three dunams called al-Rafid, I bought it 15 years ago from a man named A from Qaryut. We planed wheat, chickpeas and seasonal crops during the first two years. Thirteen years ago, I planted the olive trees and we’ve been harvesting them for the past five years. There are fifty trees on the plot.

Last Friday morning at the mosque, there was an announcement that olive trees had been cut down in al-Rafid and I went over there with everyone because I was worried about my trees; when I arrived, there were about 200 people. I saw my trees and it was horrifying to see all those trees cut down – including my 25 trees. Seventy of S’s trees were cut down, as well as two hundred of Lutfi’s olive trees and twenty of his fig trees, it’s hard to describe the sight of it.

The police and the army filmed footage of the trees and counted the trees that were cut down and then took us to Binyamin Police to file a complaint. We were there until four. When we returned, I spoke to an officer, and when I told him that I had another plot at al-Mawa’z, he told me that trees were damaged there as well. I drove over there with him and we saw that 25 trees were cut down, so that all together 52 of my trees were cut down.

I have about 15 dunams in al-Rafid, which I inherited from my father. There are ten dunams with around seventy olive trees and ten almond trees, and five dunams of uncultivated land. My children and I planted trees in 1974 when they were young.

For 37 years, I was the principle of the Turmusaya and Sinjil school, and I used to come to my plot once a month. Now I’m retired and I come three times a month to tend to the trees and the landowner of the plot by me, Jamil helps me.

About ten days ago, my youngest son J, who is 15, and I were on my plot picking almonds. When I got out of my car, I saw about ten settlers by mobile homes at the top of the mountain, looking down at us with binoculars. I was there for about two hours, checking on the trees and everything looked good.

On Friday at 8 am, Lutfi phoned me and gave me the bad news. S, my 30 year-old son and I drove over in his car. When I saw the plot, I was really shocked, I cried, and I couldn’t look at the horrifying and terrible sight.

Seeing 35 year-old olive trees butchered and laying like the dead on the ground. I can’t describe the heartache, it’s like bereavement. I consider my trees my children, I tended them, watered them with water and sweat, and I have memories from every tree.

The police closed the investigation file due to “lack of evidence.”
Silence is Golden