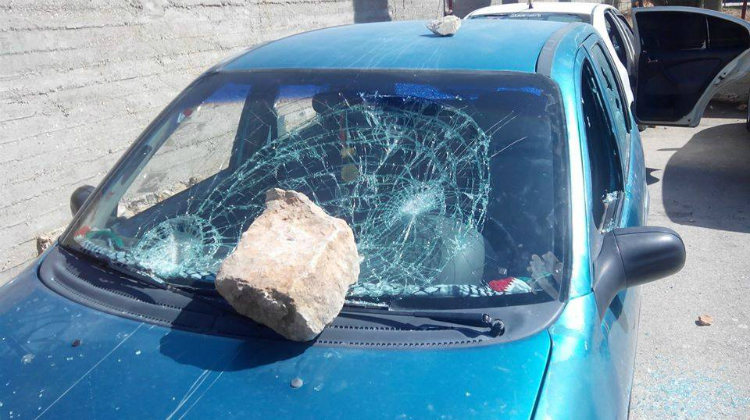 I live in Jamma’in and have been teaching math at the school in Jalud for the past two years. The school is near the outposts Ahiya and Kida. Usually I arrive at school at 7:30 am in my Skoda. I park the car in the lot inside the schoolyard.

On Wednesday October 9, 2013 at around 11:30 am, I was in the middle of a lesson in one of the classrooms. Suddenly I heard yelling and noise and then a sharp thump on the classroom door. I went out and saw a large rock by the door. The teachers shouted that settlers were attacking the school. When I went outside, I saw about 15 settlers, all masked, outside the schoolyard throwing a stream of rocks into the schoolyard and at the school building. For about ten minutes there was a massive stream of rocks accompanied by yelling and cursing in Hebrew. After that, the settlers returned towards the outpost Ahiya pouring something that apparently was flammable behind them. Fire broke out and immediately spread on the land surrounding the school. There was a big fire.

We went outside to check on the damage and I saw five vehicles, mine included, damaged by rocks. The windshield and the back window were shattered. The back door handle was broken and there was damage to the car body.

What saved the school’s windows was wire screens that are mounted on the window frames.

Meanwhile, about five minutes after the incident, a white pickup truck pulled up – it belongs to the settlement civilian security coordinator [CSC]. The man said he was in charge of security, he was in plainclothes and carried a weapon. He went inside the school and asked, “What happened?” We said settlers had caused damage. He left before the army arrived.

The army arrived after 15 minutes. The police came too. They took photos of the damage and took testimonies. We didn’t receive any document from them. The next day I went to the Palestinian police in Nablus and filed a complaint there.

I live in the village Qabalan and have been working as the school secretary in Jalud for the past three years. The high school is in the center of the village. There are several settlements around the school: Shvut Rachel and Shilo, and the outposts Ahiya and Kida. The closest outpost is Ahiya, which is south-east of the school.

On the day of the incident, October 9, 2013 at 11 am I was in the school office. Suddenly I heard one of the teachers screaming. She shouted that settlers were coming towards the school. I went outside right away and saw about 15 settlers outside the school. They were all masked. I saw them throwing rocks at the school. I immediately called the Palestinian ministry of education. They threw a lot of rocks.

I went on the public address system and instructed everyone not to leave the classrooms. The stream of rocks lasted for about ten minutes. The students were shocked and anxious. The teachers were also stunned and upset.

I saw around six or seven settlers enter the school yard. They began throwing rocks at the cars parked in the yard. I was worried they would enter the classrooms. They tried to go into a classroom, but the door was locked from the inside. They went from car to car and made sure to damage each car with large rocks.

After a while, they left and starting running towards the outpost Ahiya. Suddenly I saw flames from the direction they had run towards. The fire got bigger and burned a lot of trees and land. The fire started to burn the trees in the school.

The CSC came. He went inside the school and left after a few minutes. The fire fighters arrived within an hour.

The entire village was in a state of deep anxiety. Parents arrived and shouted where are the children. Everyone’s emotional state is pretty poor, and everyone is afraid such an event happening again.

About one hour after the incident, five-six army jeeps arrived. The army instructed us not to remove the vehicles until the police arrived. The police didn’t arrive until four pm.

After the settlers left, I saw that five cars had been damaged, including my 2005 Golf.

All the windows were shattered, as well as the sunroof, the trunk and the front left side from large rocks. The initial repair cost me ILS 5,000 and I haven’t had it repainted yet.

On October 30, 2014 the police closed the investigation file due to “lack of evidence”.
Silence is Golden