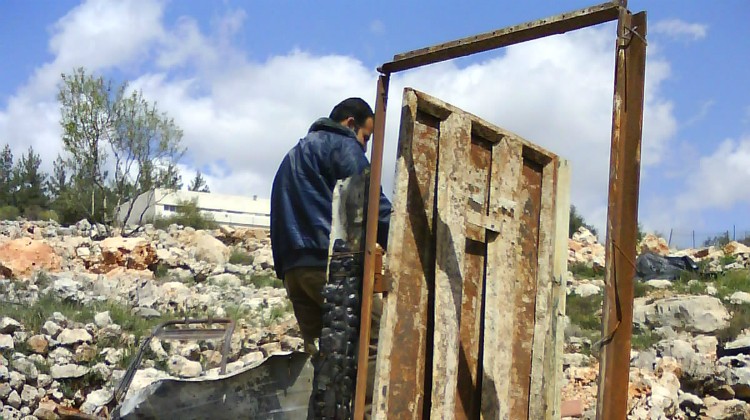 I immediately went to the plot with my brothers M and A, taking the key with me. It took us about five minutes to get there and when we reached the main entrance to the settlement, the police had just arrived too. We went directly to the plot, opened the gate and ran quickly towards the building with our equipment, which was burning, the flames were big. Before we arrived, we guessed the building had been torched, because the rest of the plot was just greenery, which can’t burn.

When we got to the plot, we saw the storage building was on fire. We keep a large water barrel by the building – 150 liters, and a hose. We found a pail and started pouring water to put out the fire. All the farming tools were inside and finally we managed to open the tap and contain the fire. It took us about twenty minutes to contain the fire and an hour to put it out completely. When we got to the plot, police cars and fire trucks waited outside the fence and once they saw we were the landowners and opened the gate to put out the fire, they followed us in. This happened after we had put out most of the fire. The police noted the incident details, didn’t take photos, and the policewoman asked us to take the note with the incident details to the Etzion Police station and file a complaint.

We assume the fire was started two hours earlier, because by the time we arrived, the fire had nearly gone out after burning all the tools in the building. My brother A was there that same day until the afternoon (3-4 pm) and didn’t see anything.

I’m certain this is arson, because the structure is completely insulated, it’s made of wood and is coated in tin. The fire was trapped inside the tin sheets until the gas canister inside the building exploded and apparently spread the fire to the rest of the building. The fence was cut in order to torch the building, this was photographed by the police.

We got home at 9:30 pm, and the next day I went with my brother M to file a complaint at the Etzion Police at about 2 pm. We went back to our land with the police, and they photographed the site. My brother M filed the complaint, I also gave testimony.

I estimate the damage to the building to be at least ILS 15,000. There were tools – hammers, rakes, the plow for the donkey, hoes, a full toolbox, pruning tools, pliers. The plot is 35 dunams, and we’ve collected these tools for years. There were also a bed, chairs, mattresses and kitchen utensils.

The fire also burned down four olive trees that were by the storage, and about 10 square meters of land where we grew barley.

On May 7, 2009 the police informed Yesh Din it had closed the investigation file due to “offender unknown”.
Silence is Golden