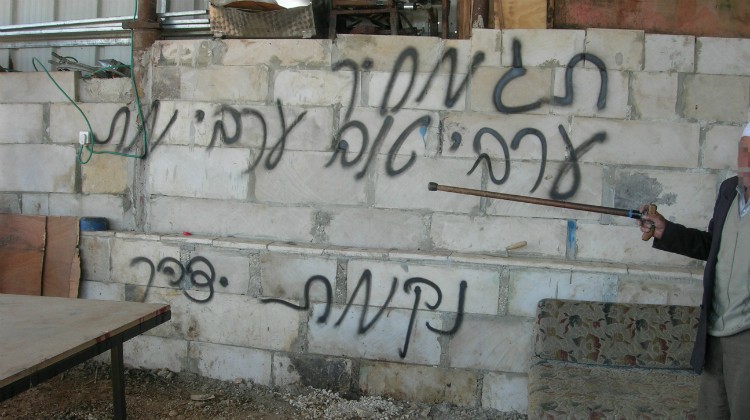 I live in Beit Ummar in an area called Batura. It’s about 600 meters west of route 60, south of Gush Etzion Junction and the settlement Kfar Etzion. The area belongs to Beit Ummar, but it’s in Area C.

In November 2011, my car was torched, along with two other cars that belong to my family. The main problem my neighbors and I have is that the civil administration and the army prevent us from farming our land close to the settlement Kfar Etzion. They forbid us from setting up irrigation on our land that is close to the settlement because such activity is considered a security threat. In addition, we’re in a secluded area and sometimes in cases of theft, they come searching [our houses].

On January 1, 2013 at 12:55 am I was awake. I live with my wife and four children in a very small house by my parents’ large stone house. Suddenly I heard an explosion close to our house. I immediately went outside and saw that my car, a Toyota pickup truck was on fire. I understood that settlers had done this. I went right back inside, woke up my wife and our relatives who live nearby. We tried to put out the fire but suddenly – no water. Our council turned off our water because of our problems with the council. Luckily, we have a water tank, we brought it and tried putting out the fire on the car. Later, we saw a tractor burning too, it was hitched to a plow and parked nearby. We calculated that it was easier to put out the tractor and that’s how we saved the plow. The car was completely burned.

I called the head of the council and he said he would come over immediately to sort out the water supply to our home, but it was already too late for the pickup truck. I also called the Palestinian police in Hebron and they contacted the Palestinian DCO. I also had the number of an officer in the Israeli DCO, so I called him too. He said he was on vacation and that he would send someone from the army to come check. Ten minutes later, the army and the police arrived in five-ten cars, as well as the Shin Bet, a lot of people. The police asked who owned the car and took his testimony. They said, “You’re lucky to be alive”. We also noticed the slogans that had been sprayed. The police translated them for us: “Price Tag, a Good Arab is a Dead Arab, Yizhar’s Revenge” and “Property today, life tomorrow”.

The police closed off the area with red tape, took samples from the fire and fingerprints. The police stayed until 5 am. They also took testimony from two of my nephews but explained that I am the complainant and said that if they needed to, they would call me. They also said they’d leave me a copy of the complaint, but they didn’t.

The car belongs to me, but it is originally registered with Israeli plates and was taken off the road, meaning it doesn’t have registration.

Instead of celebrating the new year with the family, we dealt with the fire.

On July 11, 2013 the police informed Yesh Din that it had closed the investigation file due to “offender unknown”.
Silence is Golden