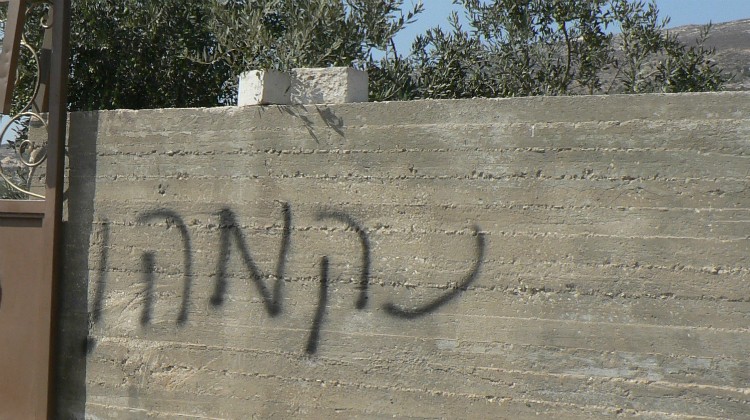 About a year ago, on October 15, 2009, there was a similar incident. The field with the stubble crop was torched and the damage was about ILS 20,000. I filed a complaint then, but it didn’t lead to anything. Since then, my daughters live in fear. Especially at night.

On September 16, 2010, the night between Wednesday and Thursday at 2:19 am, I got a call from HA, from the village, who owns a bakery in Huwarah. He was on his way to the bakery and saw the fire in my field. He said he saw the car driving away after its passengers had torched my field. He also alerted Burin’s fire brigade. I went over towards the gate immediately and saw the fire. I tried to create a barrier between the area that was on fire and the part that still hadn’t started burning. People from the village came to help me put out the fire. For my girls it was a scary incident that made them panic. I grow barley to feed my 35 cows in that field.

When I left my house and saw the fire, I didn’t see any settlers, but the baker who informed me pursued them and said he saw a small car, apparently gray, but he couldn’t see the make or the license plate number.

I immediately informed the Palestinian police. At 10 am I called the Israeli police, and they didn’t answer. I called three times, and when they finally answered, they said, call back later. On Thursday at 11 pm, Y from the Israeli DCO called and asked what happened. I told him and he said he’d come the following day, and he did, on Friday at 6:30 am. He photographed and documented the damage and took my testimony. I filed a complaint at the Huwarah DCO with officer K, and he also took my testimony. The damage is ILS 10,000.

I live in ‘Asirah al-Qibliyah. I own a bakery in the village and one in Huwarah. I leave for work every day at 2 am.

On September 16, 2010 at 2 am I left for work as usual. I went into the bakery in the village to do something small and 15 minutes later I left to go to the bakery in Huwarah. On the descent from the village, on the east side on the main road to Madama I noticed a car from afar, it was about one km away. I was suspicious because although the road was empty, it was driving very slowly, and the brake lights flickered on and off constantly. At that point, I still hadn’t noticed the fire. I continued driving. Then I reached Ibrahim’s house, which is on the left side of the main road and I saw the fire on the right side of the road, in a field of stubble crop. It was just when the fire started. I didn’t what to do – put out the fire or follow the car. The arsonists apparently noticed my car and drove away. Because it was dark, I could see it was a small car but I didn’t see the color, the model or its license plate number. I also couldn’t see the arsonists. I called Ibrahim, who went to put out the fire. I told him to focus on putting out the fire and I would follow the arsonists’ car.

I got all the way to the fire station in Burin. The fire fighters there told me that a small car had just passed the station, driving very fast. They said it was gray with Israeli license plates. They couldn’t identify the make or the license plate number either. Someone had thrown a piece of metal from the car that hit the fire truck in the station. I was afraid to drive after them, because maybe they were armed.

On Tuesday I was called by the Ariel Police station and asked to come and give my testimony. Apparently Ibrahim gave them my name. I went to the station that day and gave my testimony. The investigator asked me for the names of the firefighters who saw the car, and I refused because they’re afraid of getting into trouble.

On December 20, 2010 the police closed the investigation file due to “offender unknown”.
Silence is Golden