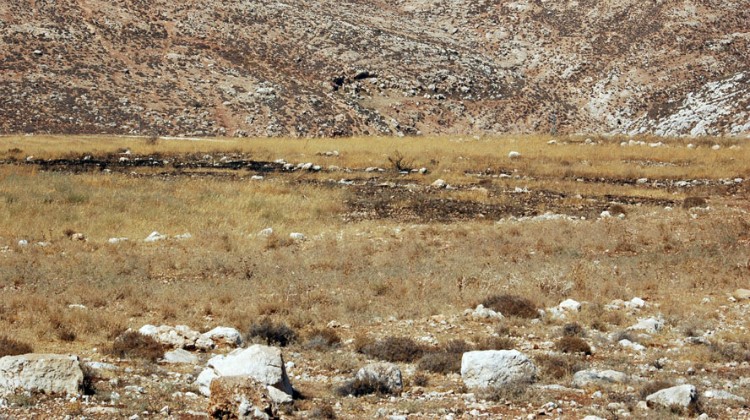 Kafr Malik is west of Allon road, about 14 km north-east of Ramallah. East of Kafr Malik is the settlement Kochav Hashachar, about 8 km away. In the 70’s, much of the village’s land on its eastern side was expropriated for military use. In the mid 1970’s, the settlement of Kochav Hashachar was built on some of this land. Before the expropriations, Kafr Malik had about 54,000 dunam – all the way to Ein al-A’uja by Jericho. After the expropriations, we had 12,000 dunam left.

Besides the settlement Kochav Hashachar, there’s also a military base located on some of our land south of the village, by the road between Deir Jarir and a-Taybah.

Allon road, which is used by the settlers, crosses the village’s land. For three years, the village residents have been suffering from settler harassment, but this year, these harassments increased significantly.

This plot of land belongs to a man from our village named HT. I lease land from him. The plot is about three dunams. I grow wheat for my use and for my flock. There are additional plots bordering this plot, which I lease from other people, and where I grow wheat all year round. I’ve leased this land and paid its owners for the past five years.

This year I grew wheat and didn’t reap it during the harvest season, I left it for my flock. On the day of the incident, August 6, 2008, around 11 pm I was at home asleep, and my phone wasn’t on. One of the Bedouin men who live by the land tried calling me to tell me that my field was torched. Because I wasn’t available, he called my brother Jama’a and told him that my field had been torched.

Jama’a and another brother, NJ went over and tried to put out the fire. They got home around 3 am, woke me up and told me the field had been burned down. I walked over to check on it. I got to the plot and saw the entire 3 dunam had been burned. I stayed with the Bedouin who live by the field until 10 am, and then I stopped a taxi and went to the police station in Sha’ar Binyamin and filed a complaint.

On the day of the incident, I was at my house with my brother NJ, watching television. I got a phone call from one of the Bedouin men who live by the settlement Kochav Hashachar and by my brother’s land. He told me that my brother Sliman’s wheat field was on fire. We both got in the car right away and drove over to check on things.

At around midnight we got to the field and saw it was completed on fire. We tried putting out the fire with sand, and eventually we managed to put it out and prevented the fire from spreading to the other plots, only 3 dunams of 100 burned. We were lucky it wasn’t windy that night.

When we arrived, we saw a parked car on the road, it had a flashing light on its roof, I imagine it was the settlement civilian security coordinator. The lights flashed but I couldn’t see the color of the car. I understood there was someone inside who was watching us, but I couldn’t see who it was. The car was about 15 meters from the plot. Later on, another car arrived from the settlement. From what I saw, the second car wasn’t a security vehicle. Around 1:30 am, when we finished putting out the fire, we got into the car to drive home. Our car was parked on the road that leads back to the main road.

When we started the car, both settler cars started driving towards us and blocked the road. Two-armed people got out of the cars, one from the security vehicle – with a gun, I recognize him from previous events, his name is B and he’s the security guard for the settlement Kochav Hashachar. The second man had an M-16 rifle, I didn’t recognize him.

Both cocked their weapons, they were frightened and nearly shot us. But I told B in Arabic (B speaks Arabic): “Be careful, I know who you are, and I also called the police.” Then he calmed down, but not before demanding my car keys and my brother and my IDs. I gave him the keys and our IDs.

B asked why we came here, I said he saw why we came, to put out the fire. He asked me, who notified you, and I said, the Bedouin. B detained us for about an hour and a half. The police didn’t come. We didn’t have any direct contact with the police, earlier on we had called the Palestinian Authority and asked them to inform the Palestinian DCO, so that they would call the police through the Israeli DCO. I don’t know what else happened. The police didn’t arrive, so I told B that we’d informed the police to protect ourselves. While he detained us, B checked on the radio (maybe with the army) our ID numbers and our license plates, but there’s no problem with my car, it’s clean.

B demanded we stand by our car and not move. Later I asked him, why are you doing this to us? Why do you let settlers burn our wheat? He replied that crazy people had done that. I said, if you have crazy people, so do we.

When I repeated that I had called the police, he said, no need to call the police, it’s a small matter. Around 2-2:30 am an Israeli police car arrived with an Israeli DCO vehicle and an army jeep. The police took testimonies from my brother and me, and asked us to take them to the plot and show them the damage from the fire.

I said I wanted to file a complaint, and they told me to come to the Binyamin Police the next day, my brother did the next morning.

At this point, B, the settlement security guard, who was translating, because as I said he speaks Arabic, I don’t know what he was translating though. Around three am we went home, we went over to my brother Sliman’s house to tell him about what had happened.

The man who was with B had dark skin, a kippah, about 1.80 meters tall, was around 28 years-old, not in uniform, no beard or mustache, black hair, balding a bit in the front, short hair. He kept threatening me and saying, “I’m not afraid of any man, only God, if you move, I’ll kill you.” He kept pointing his weapon at my head and chest.

Bedouin witness (requested not to provide any personal details)

On the night of the incident at about 11 pm we saw a car coming from the direction of Kochav Hashachar, stop by the plot and the driver turned the engine off. We heard a car door slam, and someone left the car and walked over to the plot. Right after that, we saw a fire burning and spreading quickly, and the car turned around and drove back towards the settlement. A few minutes later, we saw Kochav Hashachar’s civilian security coordinator arrive and park, and another car joined him. We informed the people from Kafr Malik that their field was on fire. They arrived and we saw them putting out the fire. We heard the voice of the security coordinator. Our caravan is north of the settlement, about 500 meters from the plot that was torched.