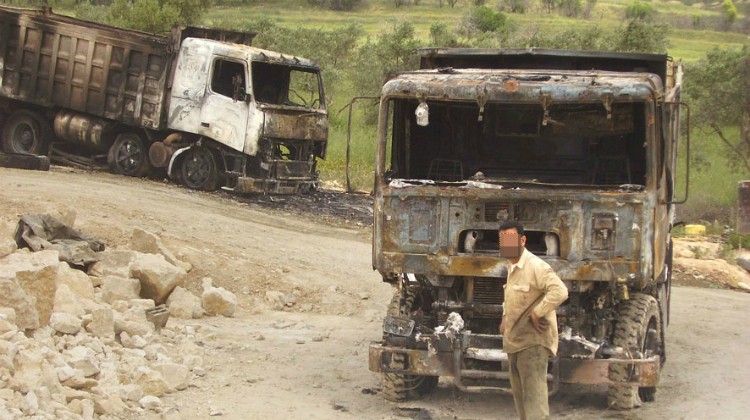 My family owns a quarry on a hill west of Huwarah checkpoint. Above the quarry is the outpost Givat Ronen (Givat Arussi) and at the top of the hill, north-west of the quarry, is the settlement Har Bracha.

The quarry was founded in 1976 and operated until the beginning of the second intifada in 2000. We reopened in November 2005. The quarry belongs to my father. My three brothers and I work there. YH, a settler from Har Bracha also works with us.

The settlers started harassing the quarry while it was still closed, and the harassment has continued since the quarry reopened. The largest damage took place around 2003, when two mobile homes were stolen from the site (one 12 meters long, and the other six meters long), which were used as an office and living quarters, along with all the equipment and furniture that was in them. The storage building made of concrete was broken into, and all the heavy machinery inside was stolen. We heard about this from people who crossed the checkpoint. I filed a complaint to the DCO in Huwarah, and then at the Ariel Police (one of the police officers who came to the quarry yesterday following the fire told me that one of the mobile homes is at the Ariel Police station, and they awaiting a decision by the court in this matter).

Besides this current complaint, we filed three additional complaints since 2003. In one incident, around 2004, settlers arrived with heavy machinery and cranes in order to dismantle the quarry. People who were at the checkpoint saw them and notified the police, who came and caught the settlers red-handed and confiscated their cranes. We have photographs of the people. A complaint was filed.

Another complaint was filed at the end of 2004, at the Ariel Police, when I came [to the quarry] and saw a settler from Elon Moreh leaving the quarry. The soldiers at the checkpoint stopped him at my request. Harassment continued throughout our preparations for the reopening: in October 2005, sugar was poured into the generators, and the water was contaminated. We checked for traces in the well, after two workers were hospitalized with poisoning.

Once the quarry resumed operations, quarry and vehicle tools were stolen, the machine’s chains were cut, and more. In these cases, we didn’t file a complaint.

I usually sleep in the mobile home in the quarry, to guard it. On April 23, 2006 around3 am, I heard voices outside. I opened the door and saw three people about 40 meters away. I thought they were soldiers, because the army patrols the site, and I didn’t go outside. I looked towards the checkpoint and saw nobody had reached it. I saw fire by the trucks and the generator. I tried to put out the fire using sand and water, but I didn’t succeed. The fire spread quickly. While I was trying to extinguish the fire, I saw the people go up towards the outpost Givat Ronen. I couldn’t extinguish the fire.

At around 4 am I walked to the checkpoint. There were three soldiers there. I told them what had happened, and they called the DCO and the police. I asked them to chase the arsonists, who had run up the hill. The police arrived at around 6:30 am, took my testimony and gave me a receipt for my complaint. At noon, three policemen arrived in two cars and took photographs.

On March 29, 2007, the police informed Yesh Din that the investigation file was closed due to “offender unknown”.
Silence is Golden