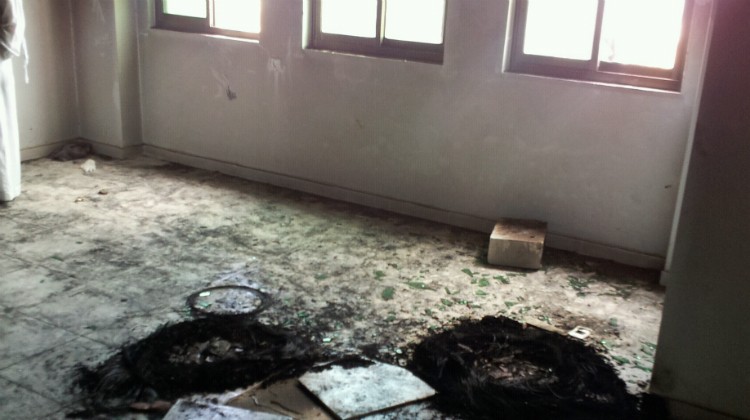 I’m the head of the council. In Qusrah there’s a new mosque under construction, since 2010. It’s still in the final stages of construction, but it’s being used for prayers already. The ground floor is supposed to be a hall for reading and teaching Quran. The mosque is called al-Nurein and is on the south side of the village. There are no guards for the holy sites in the village, and the mosque doesn’t have a custodian on site regularly.

On Monday September 5, 2011 at 7 am I got a call from someone who prays at the mosque, and he told me that people who arrived for prayers had discovered signs of torching on the ground floor of the mosque, a small plastic bottle and the remains of two burned tires. There were large slogans painted on the exterior wall in Hebrew [“Eli Ayin and Migron = social justice”]

I immediately went over to the mosque and saw what had happened. I don’t understand Hebrew, and the others explained what was written. I saw the tires, the bottle and the charred walls inside. Luckily there were no books or carpets inside, and the damage was limited. I called the governor of Nablus, the Palestinian DCO and the Palestinian ministry of religious affairs. In the meantime, Palestinian representatives and media started arriving. An Israeli DCO officer arrived at 8 am with six or seven police officers and soldiers and found a lot of angry people in the village. His people took photos of everything, they took testimonies, took fingerprints and assessed the damage. When one of his soldiers tried to clean off the slogans, we prevented him from doing that.

On November 26, 2014, over three years after the mosque was torched, the police informed Yesh Din that the Central District Attorney’s Office closed the investigation file due to “perpetrator unknown”. The Israel Police’s Unit of International Crime Investigations rejected Yesh Din’s legal team’s request to review the investigation file.
The Central District Attorney’s Office rejected Yesh Din’s appeal of the decision not to allow the organization to review the investigation file because “The nature of such cases, characterizing ideologically-motivated offences, which are left open, is that evidence is reviewed from time to time, to prevent the evidential picture from being altered and allow to determine findings and conclusions different from what we have at this stage”.