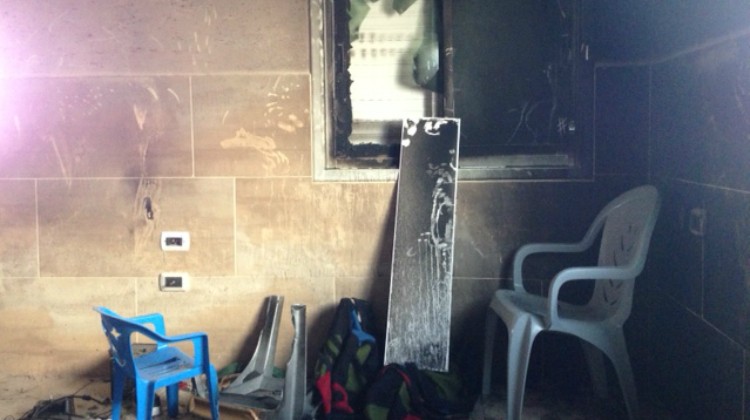 Fatma Al Adour, 31, married and the mother of five, a-Deirat

We live in the South Hebron Hills, east of the city Yatta and about one km north of the settlement Carmel. The house is about 30 meters away from the main road between Yatta and the settlement Carmel. We are often bothered by settler traffic on the road by our house. Usually the settlers curse the residents as they drive through. Settlers have attempted to run over herds owned by people in the village.

My husband, our five children ages 5-12 and I live in our house.

On the day of the incident I woke up at around 2:30 am, unrelated to what happened. Suddenly I heard a dog and my youngest son woke up afraid of the barking and I tried to put him back to sleep. I didn’t manage to fall asleep before I heard glass breaking in our living room. I woke up my husband to check what had happened. My husband thought it might be soldiers, so he got up and started checking to see where the glass broke, he opened the door to the house, checked outside and saw people outside the house.

My husband, who was on the roof realized that there was a fire and he immediately came down to the living room. We began shouting and tried to put out the fire. People woke up and came to help us.

Close to 6 am the police arrived, took testimonies, soldiers from the DCO also arrived.

None of us was physically harmed, but there was damage to our property including the living room and furniture worth approximately ILS 12,000. I haven’t been able to sleep since. I can’t believe how we were saved by miracle. My daughters, who often used to sleep in the living room won’t let us to arrange the room the way it used to be. They have nightmares.

I want to note that my husband built the house we live in over the past five years. We moved in just three months ago. God protected us.

Mahmoud Al Adour, 33, married and the father of five, a-Deirat

On the day of the incident at 3 am I was asleep at home with my wife and children, and suddenly I heard dogs barking. My wife woke me up, but the barking seemed normal, and then right after I woke up I heard some noise from outside. I thought it might be robbers, so I got out of bed to check.

I went over to the front door and then I heard the sound of something being thrown at the living room window grate. I went over and opened the door and looked out, but because it was dark, I couldn’t see anything. I turned on the light and took another look, that apparently frightened the people who were outside the house, I was able to see one of the people holding a burning bottle and the silhouette of someone standing by the wall of the house.

When I saw the burning bottle, I was afraid the person might throw it at me, and I decided to go up to the roof to better see what was going on outside and to protect the house from up on the roof. There are rocks on the roof and all kinds of other things I could use to drive away the attackers. While I climbed up to the roof, I started smelling smoke from the living room and then I saw two or three people running towards a car that was parked across from the house, about 20 meters away. The engine had been left running and the torchers got inside and ran away.

I started shouting for the neighbors to come help me, and then I went back down to the living room and started putting out the fire. Neighbors who woke up from my shouting came over. The living room furniture was burned.

When I went outside, I saw graffiti in Hebrew on the walls of the house and then I realized settlers had come to burn down my house. One of the neighbors called the Palestinian police, although they are not responsible for the area, but so that they would alert the Israeli police. We waited until 5:30 am and then one of the neighbors called the Israeli police directly. At around 6 am a lot of police vehicles and army and officers from the Israeli DCO arrived. They saw the fire, took photos of the living room and the graffiti outside, took my testimony, collected findings, including the bottle that was thrown into our house and a box of matches.

A few days later, the police called to ask whether anyone from our family had touched the bottle, and I explained that my brother had. The officers asked that my brother and I come to the police, they took my brother’s fingerprints and gave me a receipt for my complaint. I haven’t heard from the police since.

On the night of the incident, January 31, 2014 at three am I was awake and heard dogs barking. I woke up at around 2:30 am, we go to sleep early and get up early, especially in the winter. My wife said – go and see what’s going on. I said – maybe soldiers came to arrest someone, because the army usually arrests people at night. I left the house to see what was happening. I’m a little limited physically, I had a stroke a while ago, and it’s hard for me to use my left leg.

Suddenly I heard a noise like a thud, I thought it might be a knock on the door. Suddenly I realized it was the sound of glass breaking from the direction of my son’s house, which is 15 meters away from my house. I can see his house from mine.

I looked over towards my son’s house and saw flashes of light, at first smaller and then bigger. I understood this was a torching, that settlers had probably come to burn down the house, we hear about this occasionally on the news.

My wife started shouting in order to wake the neighbors up and started walking over to our son’s house. I looked outside to see what was happening and saw two or three people walking away towards their car, which was parked by the road. They got into the car and drove away to the south, I saw the car until it reached the settlement Ma’on, you can’t see beyond that from here. It was dark, I can’t give any details about the car.

At this point, people from the area helped my son put out the fire. After that, my son went to the mosque to tell people what happened. It was already about 5 am. They recommended he call the police. At around 5:30 am he called the police and around 6 am the police arrived. The police took my testimony as a witness, and from my son as the complainant.

Three police and civil administration vehicles arrived. They collected findings from the scene, including the remains of a plastic bottle that held the gasoline and matches. My son explained that while putting out the fire, his brother touched the bottle and several days after the incident, the police summoned him to give fingerprints.

The torchers also sprayed graffiti on the walls of the house – “Revenge Kingdom of Israel”. If there hadn’t been graffiti, they might not have believed us.

On May 10, 2016, the Central District Attorney’s Office informed Yesh Din it had closed the investigation file due to “lack of evidence”. It added that “One of the suspects was arrested in August 2015 and held in administrative detention, among other reasons, based on suspicions he was involved in offenses concerning this investigation file.”
Silence is Golden