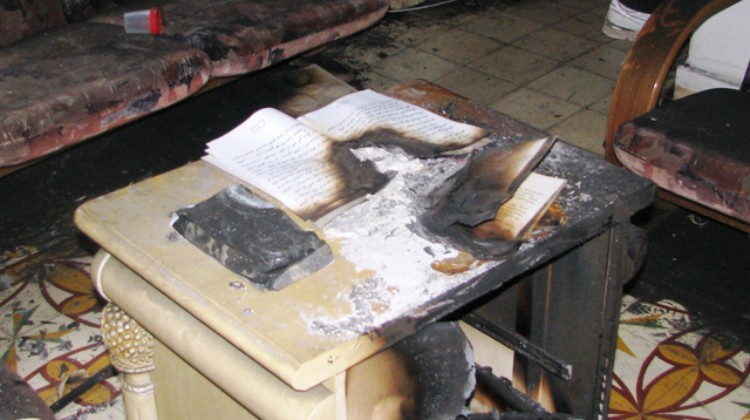 My husband SN and I rented this house on our wedding day, exactly three years ago. We planned on building our own house at some point, and we started saving up. A month ago, we started building a house in the village center. I have a son who is 1.5 years-old, and I’m at the end of my pregnancy now, just about to give birth. I studied computer science at an-Najah University, and I teach at a school in Burin.

The house we rented is the last house in the village. It’s on the hill on the eastern slope. I’ve been living in constant anxiety since we got married. Because all the incidents take place right behind my house. The settlers from Har Bracha come down right by my house, throwing stones, setting fires and shooting frequently. Sometimes in the daytime and sometimes at night. There’s no security. I’m afraid and there’s no way I stay home alone. I’m about to give birth. When my husband doesn’t sleep at home, I shut and lock up the house and move to my parents’ house inside the village, about 300 meters away. When my husband is away, I don’t allow any of my sisters or sisters-in-law stay with me. When my husband is here, we stay home.

Two days ago, on July 26, 2008, we slept in our home and in the morning my husband traveled to Jericho to train in the Palestinian police. I closed up the house and moved to my parents’. This morning I woke up at 4:30-5 am for prayers. I smelled a strange smell, like plastic soot. I went out to the balcony and though maybe the smell was coming from fires set the night before. I went back to sleep. RN, my brother-in-law arrived at about 8 am to ask for the key to our house, he said something like something had burned down by our home, but he didn’t go into detail and didn’t tell me the truth. A while later, there was an uproar and then I learned that my house had been torched.

When we stay at our house, the windows stay open, but when I leave, I close all the windows and doors. When we moved in, we installed metal screens on the windows to protect ourselves from stone throwing. There is a square opening in the center of the metal screens. Apparently, settlers threw something on fire into the house through that opening, after they broke two window panes. Everything in our bedroom burned. Mainly our son’s bed, which was completely burned. We had 10,000 Jordanian Dinars in the mattress for construction of our new house, my husband took 200 when he went to Jericho.

I’m a herder. Every morning I take my flock out to graze. This morning, Monday, at about 7-7:30 I left with my flock and walked the same path I took yesterday, east of the village, where the settlers burned the fields. I walked on the path that goes by the last village house, where SN’s family loves. He’s a senior officer in the Palestinian police, and his wife AN teaches computers at school. When I passed their house, I could see that the south window that faces the path had a broken window pane, and there was black soot and smoke coming from the window. I immediately called RN, SN’s brother, because I knew that SN was training in Jericho. I didn’t continue to the grazing land, I returned to the village with the flock, I left my flock at home and walked back to the torched house. When I got there, the village fire brigade had arrived, council representatives, and a lot of people. SN arrived at 10:00-10:30. The Israeli police and DCO representatives arrived at around 11:30. There were four jeeps, one from the DCO, one from the police and two additional jeeps. They left quickly. The officers took SN to the Ariel Police with them to file a complaint.

I’m SN’s brother, he lives in the house that was torched. I live on the north side of the village, my house is high up, and I can look out over the entire village. I saw the torching of the almond trees yesterday evening too. But I didn’t see my brother’s home being torched because I was asleep. I woke up at 7:30 am from Walid E’id’s call, he told me that my brother’s home was torched, that two windows were broken and smoke was coming out. My brother is in officer training in Jericho, he’s a senior officer in the Palestinian police, he was trained as a computer engineer. He and I both studied in Russia for six years. I’m a civil engineer.

I got dressed and left on foot, because I don’t own a car. I walked to my brother’s house. I was calm, because I knew his wife AN hadn’t slept at home. She and her young son went to her parents. She is finishing her ninth month of pregnancy. I knew the house would be locked. Her parents live close by the house that was torched. I went over to take the key. I didn’t want to frighten AN in her condition, so I only told her father, and asked for her house key.

Her father and I walked to the house. We saw smoke and soot coming out of the broken windows. When I opened the front door, all the soot and smoke billowed out. We ran back, away from the smoke. The smell was strong. We waited for about 15 minutes until the smoke dispersed and then went in. In the meantime, word spread and lots of people came to the house. I called the village fire brigade before I opened the front door and asked them to send a truck over. They arrived but didn’t spray water because there was no fire, everything was singed. We saw the child’s bed in the bedroom completely burned. As well as table, curtains, a television, a tape recorder. There is a computer and a phone and the like in the corridor, which they used as an office. It was all full of soot.

I called my brother SN in Jericho to tell him that settlers had torched his home. I called the Palestinian and the Israeli DCOs and spoke to an officer. He said, “Come over here, file a report.” I said, “Come over yourself and witness what they’ve done, and take photos.”

The police, the DCOs and the army arrived only about three hours later. My brother arrived from Jericho at about 10 am. My brother got here two and a half hours later, and he came from Jericho; the police took over three hours to arrive from Ariel. We went into the house. The army, the DCO and the police took photos of the entire house. Everything inside was burned, the walls were unharmed. Just black.

On September 8, 2008, the police closed the investigation file due to “offender unknown”.
Silence is Golden