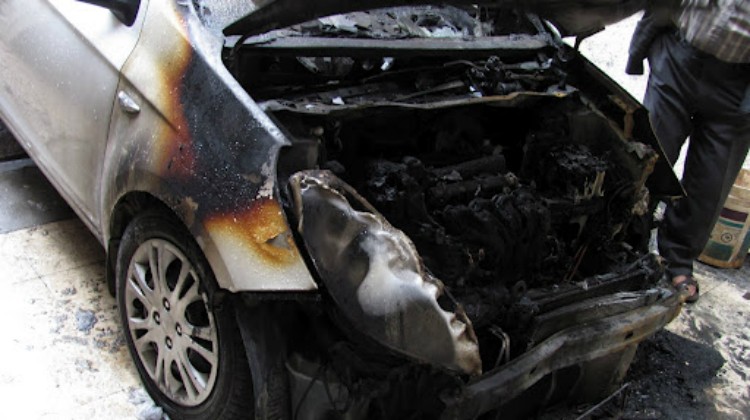 I live in in a-Nabi Elyas, I live in the village center, about 100-150 meters from route 55. It’s a two-story building, with a tailor’s shop on the first floor, I live with my family on the second floor.

On December 16, 2012 at 2:30 am I was at home, asleep. I usually park my car by the entrance to the building, close to the tailor’s shop on the first floor, and that’s where it was parked that night. Suddenly, I heard noise and neighbors shouting outside saying my car was on fire. I got up right away and went downstairs. I saw a big fire burning the front of my car. I have a hose downstairs and I tried putting out the fire, but the fire was very strong and completely burned the front part of the car. This was 2010 white Hyundai. The car costs around ILS 70,000.

At around 3 am, the Palestinian police arrived, and a little later the Israeli police and army arrived too. An officer from the Qadum police station took my testimony and also took pictures of the car. Today at 10 am, an Israeli Police forensics team arrived, but I wasn’t in the village because I went to file a complaint with the Palestinian police in Qalqiliyah.

I personally didn’t see settlers, and I didn’t hear about anyone else in the village who did. I don’t know who torched my car, I don’t have any enemies. It’s the police’s job to investigate and find those responsible, they can determine who torched the car. I want to know who did it and receive compensation.

[An offensive slogan in Hebrew was sprayed by the torched car that night].

On March 22, 2012 an indictment was served against a minor for arson, risking human life on a vehicle road, interfering with the work of an officer and defacing property. The case resulted in a plea bargain, the details of which are confidential because the accused is a minor.
Silence is Golden