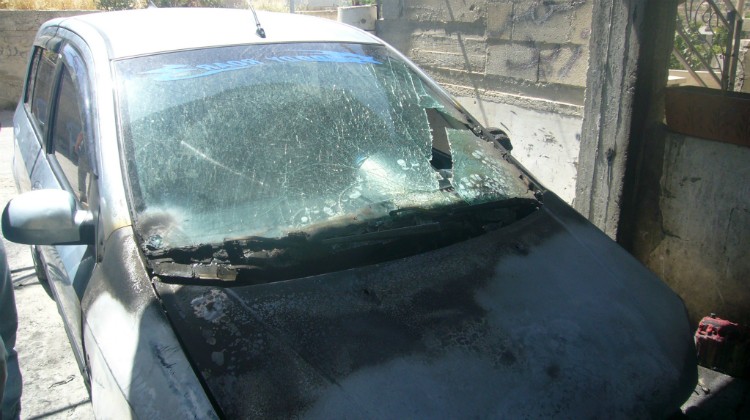 I live in Einabus, south of Nablus, in the village’s northern neighborhood, on the road leading to the village school. The outposts of the settlement Yizhar are on the mountain top 500 meters north of the building where my family live. The rest of the village residents and we all suffer from the settlers’ violence, they come down from the outposts, damage our trees, drive away farmers using violently, come all the way up to the village houses and throw rocks. About a year ago, they burned a car in the neighborhood and two weeks ago, they punctured the tires of four cars and caused damage to classrooms in the village school.

On May 17, 2012 I was at home, asleep. At 2 am, I suddenly heard a noise from outside and dogs barking. I woke up and went to the window in my bedroom. I smelled smoke and fire. I immediately went out to the balcony and saw three or four people standing under the tree outside. They looked like settlers to me because they had sidelocks, kippahs, black pants and white shirts. When they noticed me, they began running towards the outpost. I think they were young, because they ran fast. I couldn’t identify them because it was dark, and because of the situation I couldn’t concentrate on that. I was afraid to run after them because I was worried that they might be armed.

At the same time, the front end of the car parked by the main door to the building was burning, the fire was strong. I wanted to put out this fire first because I was scared the fire would get inside the building. I started calling for help, and my father and brother woke up. There’s a hose and a tap outside, and we started putting out the fire. The smoke got inside the house and we started evacuating the children and the rest of the residents from the building. Twenty minutes later, after the entire front end of the car had burned completely, we managed to control the fire. The front door to the building was also burned, and black smoke covered the building’s facade. The car was parked just by the entrance and it was a miracle the fire didn’t spread inside.

On July 1, 2012 the police closed the investigation file due to “offender unknown”.
Silence is Golden