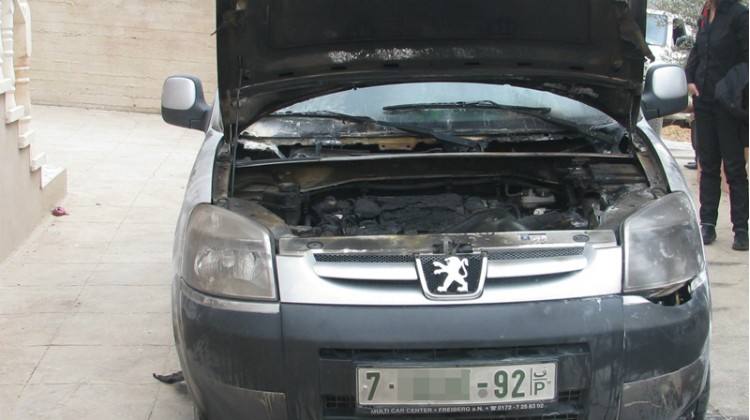 Bassam Rashdan, 41, married and the father of six children, Einabus

I live in one of the outlying houses on the northern part of the village, I have six kids and I work for the Palestinian media corporation. My house is fenced off, there’s a metal fence and barbed wire surrounding it. I have a car that I bought a month ago, parked in the yard, it’s a 2007 Peugeot.

Today, January 27, 2011 at 3:30 am, my neighbor HR called me. The phone woke me up. There’s a window in the bedroom looking out to the yard. I got out of bed because of the phone ringing, and from the window I saw flashes of light from the yard. I opened the window and saw that my car was on fire. I took a fire extinguisher from the stairwell and ran over to put out the fire. I kept thinking – why? I’ve never hurt anyone.

I opened the gate for HR and we put out the fire together. Once we finished putting out the fire, I brought a flashlight from the house and we walked around and saw that part of the barbed wire fence around the house and yard had been slashed. I walked all around the house and then I saw a slogan in Hebrew on the stone wall. My Hebrew isn’t so good, so I didn’t really understand what was written. But that’s when I realized this wasn’t a Palestinian, this was the work of settlers.

I called my brother-in-law, who works for the Palestinian police and told him everything quickly without stopping. He said, I’ll be there in five minutes. He came over, and on his way, he talked to the Palestinian DCO and police. Then I started getting calls from the Israeli police and army. The army asked me to come pick them up, meet them at the entrance to the village because they didn’t know how to get to my house. I borrowed my father’s car and drove to the village’s entrance and led them here. We came here and went to check.

At first there were three or four jeeps, then two more joined. There were soldiers, Shin Bet and police (forensics unit) who took fingerprints, including mine, and photographed everything – the car and the wall with the slogan sprayed on it. One officer filled out a report and took my testimony, I signed it.

After that I went outside and saw soldiers painting over the slogan on the wall. I said, you aren’t allowed to erase that, and an army officer said, don’t worry, we took photos and we have them. I photographed them painting over the slogan. I asked one of the officers, who spoke some Arabic what it said, just so I would know. He said this group belongs to a settlement by Qusrah and they do this kind of thing all over. He said that Eli Ayin is an outpost by Qusrah, and this slogan said “Eli Ayin, we will not forget”.

My house and Bassam Rashdan’s house are both at the edge of the village on the north side, where the mountain slope begins. These are the last houses in the village, there are five such houses, located under one of the outposts that belong to the settlement Yizhar, south of the outpost, about 400 meters below it as the crow flies.

I get up at 3 am every day to get ready for work, I work as a plasterer in Israel, I have a work permit. Today like every day I got up early, and then I heard my neighbor’s dogs barking and realized something was happening. I opened the window that faces my neighbors’ house, but I couldn’t see anything. The dogs went on barking. I went up to the roof of my house and looked towards the west, and I saw my neighbor Bassam’s car burning right there in the yard.

I called him and he didn’t answer up, I guess he was asleep. I climbed down from the roof and ran towards the car to put out the fire. The gate to the yard was closed, I yelled for him to open it, the car was on fire. Bassam opened the window and saw the flames. He opened the door and went out to the yard, opened the gate for me and we began putting out the car with an extinguisher. It looked like they had poured something flammable around the car, over the tires and the motor. We started putting out the fire around the car, but the strongest flames were on the engine hood. Finally, we managed to put it out, but the motor and the wheels and the body were all burned up. Serious damage. So were the windows and the hood.

It took us about 10-15 minutes to put out the fire. After that we walked around, we didn’t see anyone, but we saw that the barbed wire was cut and we found a slogan sprayed on the outer wall in Hebrew, we didn’t understand what it said (I speak Hebrew but don’t read it). I stayed with Bassam, he started calling people, the Palestinian DCO, people from the village. I stayed with him, and I didn’t go to work.

At about 5:30 am, four jeeps arrived – one border police jeep and three military jeeps. There were 12-13 soldiers all in all. They took pictures of everything and called the Israeli police. At 6:30 am, one of the military jeeps drove over to entrance of the village to escort an Israeli police jeep. The police jeep arrived and one of the passengers was a plain-clothed policeman who introduced himself as the Shin Bet regional officer, 4-5 others were forensic technicians and they checked the car and took photos of it all. One of the army officers told the soldiers to erase the writing from the wall. The soldiers brought some paint and painted over it.

On August 6, 2014 over 3.5 years after the vehicle was torched and the slogan sprayed, the police closed the investigation file due to “lack of evidence”.
Silence is Golden