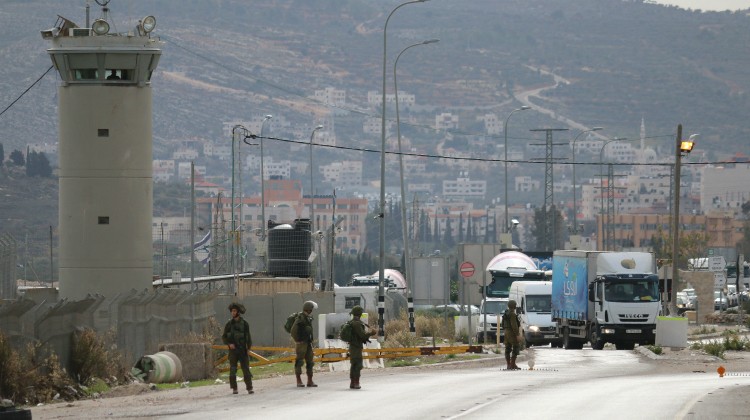 I live in Rujeib and own a factory in Huwara, on the main road from Jerusalem to Nablus (route 60), about 200 meters before Huwara checkpoint when you’re coming from Nablus. There’s a large watch tower at the checkpoint looking over the factory. Over the past few years, I’ve filed five-six complaints against settlers for assault, theft and damage to my factory.

On Sunday April 24, 2011 I was at the factory. At around 12:30 pm I saw lots of settlers’ cars standing on the side of the the road by the entrance to Huwara checkpoint, there’s also a military base there on the eastern side. By the line of cars, there was also a large group of settlers standing outside the cars. I knew they were planning something. I saw them throwing stones at Palestinian vehicles on the road. The settlers blocked the road and started driving towards the factory. I saw them coming towards us. I was afraid and started to close the factory entrance. I saw dozens of people running towards me. Soldiers who were present stood by without doing anything. I ran away with the workers towards the hill.

My car was parked at the entrance to the factory, a Suzuki from the 1990s. I saw smoke coming from my car. Later, the settlers continued towards the center of Huwara and the car burned completely. I estimate its value at about ILS 5,000.

It was pandemonium, dozens of settlers and the army. The previous night, there had been an incident at Joseph’s Tomb. My Palestinian ID card was in my car and it burned. On their way to Huwara, the settlers damaged other cars as well as houses. I filed a complaint at the Palestinian DCO.

On August 15, 2011 the police informed Yesh Din that it had closed the investigation file due to “offender unknown”.
Silence is Golden