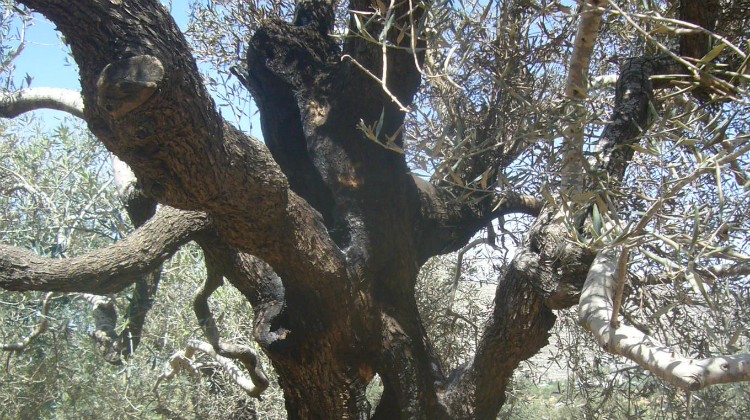 I live in Qaryut in the district of Nablus. I own five dunams of farmland on the western side of the village, which is known as the Fatisheh. The plot is about five km north of the houses of the settlement Eli and three km from the settlement’s security road. There are about 100 ancient olive trees on my plot, 100 years and older, known as Roman olive trees. There’s a settler named KH who lives by himself on the village’s land in a farming shack, he’s known to be violent and start fires, cut down and harm trees. A lot of complaints were filed against KH, I also filed one two years ago for uprooting and damaging trees. A month ago, he was caught red-handed with a saw, and I’m surprised he wasn’t arrested.

When I arrived, I saw about ten olive trees on fire. The trunks of the ancient trees are hollow, and whoever torched them had poured gasoline inside the trunk and torched tree after tree. I saw the trees burning from the bottom up. There’s no water there and it was impossible to put out the fire. At 2 am, fire fighters arrived from Burin. The fire was still burning but the firefighters left without putting the fire out because they claimed they required coordination with the Israeli army before entering this area. I don’t know who gave the order to leave the area. I stayed there until 4 am, and the fire was still burning until the trees burned down.

Around 10-11 trees were burned, including two that belong to me. The people from the village didn’t see whoever torched them. The morning of the day after that, we had previously coordinated with the Israeli army to go and plow our trees by the security road around the settlement Eli. At around 10 am Israeli police officers arrived and said they wanted to check the area of the fire. I went with them and with the forensics team to the site of the fire, they photographed the trees and took samples of the flammable material. I gave them my testimony and signed it. They said that if they required any further information, they would contact me. In my testimony, I said I think the settler KH is responsible for the torching, because nobody else is around there. The investigator told me that the night before I came to the plot they had caught someone, and from the news I understood it was KH.

Two years ago, KH was found guilty in court and was barred from the area for six months, but the ruling was never enforced. There’s another indictment against him for assaulting one of the farmers from Qaryut [a complaint was filed with the assistance of Yesh Din] and I don’t understand why he wasn’t arrested before this and hasn’t been sent to prison. I hope that this time he’ll receive the punishment he deserves and will be barred from returning to this area.

On April 8, 2014 approximately one week after the torching, the Jerusalem District Attorney’s Office served an indictment against the settler KH for arson.
The defendant was convicted of arson according to his confession and as part of a plea bargain. On March 15, 2017 the Jerusalem District Court approved the plea bargain and sentenced KH to six months to be served through community service, six months of probation (for three years) and compensation of the victims of ILS 5,000.
Silence is Golden