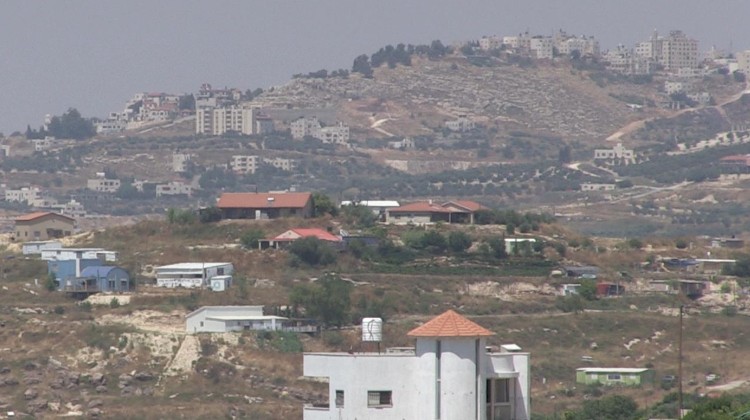 I own 20-25 dunams of land east of the village Far’ata, about 2.5-3 km from the village and about two km south of the outpost Havat Gilad. We plant wheat and vegetables. I go to my land every day at around 5:30 am. It’s located around 200-300 meters from ST’s land, NT’s father.

On Monday June 1, 2009 at around 5:30 am I went to my land. At 11 am I got a phone call from NT, who told me that settlers had set a fire by his land. I left my plot and walked over to NT’s father’s land. NT and his father were there and the three of us put out the fire that was burning by their land. While we were putting out the fire, a white settler car pulled up. They had Molotov cocktails that they threw into the wheat fields. There were four settlers in the car, only one of them got out of the car to throw the Molotov cocktails. He was masked. He threw a Molotov cocktail and then went on to throw additional ones in different spots. Once we put out the fire by ST’s land, the settlers drove farther off and started setting fires in other places, to the east. They stopped the car, and the four of them began torching additional plots.

I started calling people from the village, asking them to come and help put the fires out. Four or five young people came from the village, it took them at least half and hour to arrive. By the time the arrived, the fire had spread and gained strength and we weren’t able to control it. I called the fire department in Qalqiliyah, and it took them at least half an hour to arrive. They arrived at around 12 pm. It’s very hilly terrain, and the fire truck couldn’t reach all the sites.

At about the same time that the fire truck arrived, settlers attacked us, there were over one hundred settlers who came on foot. Most of the settlers were masked, they took their shirts off and used them to cover up their faces. They started throwing rocks at us. While they were throwing rocks, one of the settlers also threw a Molotov cocktail at us. It happened to hit the settler’s white car and the car went up in flames. At about that time, the army arrived. I saw three army jeeps and one police jeep. About fix-six soldiers got out. Once the settlers saw the soldiers had arrived, they walked back towards the outpost Havat Gilad.

In the meantime, NT’s leg was hurt by a rock the settlers had thrown. I took him over to one of the soldiers and showed him NT’s bleeding leg, the soldier dressed his leg and told NT to go to the hospital. The soldiers moved the settlers away, and we began putting out the fire. It took until at least 4:30-5 pm to put out the fire with the fire brigade. The fire ate up at least 500 dunams and burned about 1,500 olive trees. The fire truck left at 4:30.

I stayed on my land. I put up a tent and stayed there to sleep on my land all night long. I continued to sleep there during the following nights because I was afraid our land would be torched. I slept there with my wife and sons – B (19) and M (14).

On Wednesday June 3, 2009 at 2 am I lay awake. I had a flashlight with me, and I could see two masked men start a fire on my land and then they ran towards the outpost Havat Gilad. One of the men wore a red shirt and the other wore a white shirt. I saw a group of four other people lighting a fire somewhere else. Both groups ran in the direction of the outpost. I couldn’t see the four people in the second group, and I couldn’t see whether they were masked or not.

I began putting out the fire, and my sons and my wife joined me. When I began, I called my cousin A and ST, NT’s father and asked them to help us put out the fire, I was worried we couldn’t handle the fire ourselves. They arrived at 2:15 am and we managed to put out the fire. About 20 square meters was burned. It wasn’t serious damage. We stayed awake until the morning.

I stayed on my land until Friday, June 5, 2009. On Friday before daybreak, three settlers came down again from the direction of Havat Gilad. I was on my land with my brother R, my cousin A, both sons and my wife. We saw them because they used a flashlight. We heard them talking, they were about 150 meters away. They said, “Let’s get closer, there’s nobody there.” They spoke Hebrew, I can understand a little Hebrew and my brother R understands Hebrew. I turned on our flashlight and we ran towards them, and they ran back towards the outpost.

On October 19, 2009 the police closed the investigation file due to “offender unknown”.
Silence is Golden