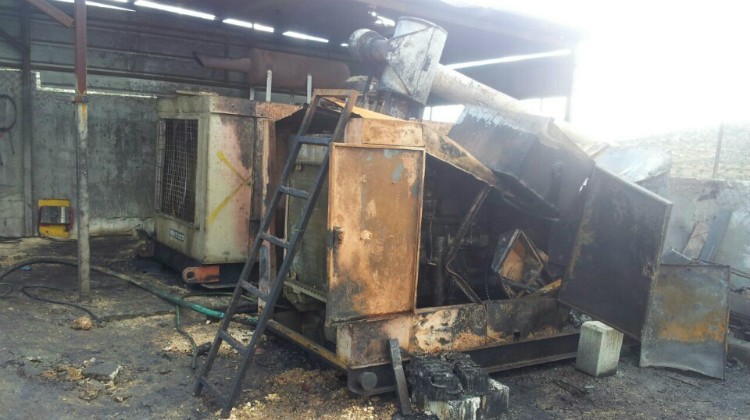 I live in Beita, a town south of Nablus with about 13,000 residents. Two years ago, I started a factory producing chicken feed on the seam line between ‘Aqraba and Beita.

My family owns the land where I started the business, there are 4 dunams there, it’s a very isolated area – no houses at all in the area. The place is fenced in with a concrete fence that is about two meters tall and has a wire fence above it. There’s a large gate. I have a night watchman who arrives at the end of the workday and sleeps there, and a dog. I don’t have electricity and of course I don’t have security cameras, so I bought two diesel-operated generators. I have a diesel tank that holds 15,000 liters of fuel. The generators and the fuel tank are in the yard by the tall fence.

The factory is about six km away from the settlement Itamar, which is above it. The settlement looks right over the factory, and there’s also a dirt road leading there.

This isn’t the first time we’ve been harassed by settlers. During Operation Cast Lead there was an attempted arson, they came on a day when there weren’t any workers there because it was Ramadan and we worked at night because of the fast. There was a fire and the watchman who was inside and was scared to go outside heard voices in Hebrew and noises. In the end, he managed to control the fire using our fire extinguishers. We didn’t file a complaint at the time because it was a tense period because of the war.

About three weeks ago, the watchman heard noises again and voices speaking Hebrew. He was afraid to go outside and locked himself inside the factory. He called me and I came over with other relatives and apparently that made the settlers run away, they had come driving ATVs on the path.

On December 9, 2014 my workers, from Awarta and Beita, worked extra hours – until midnight. At night the watchman stays and sleeps at the factory and he left at around 8:30 am.

On December 10, 2014 at 10 am, my foreman from Awarta arrived at the factory and saw smoke coming from the area of the wall. When he approached the gate to the factory to open it, he managed to see three people on an ATV driving towards the settlement Itamar. The foreman immediately called me and I called the Burin fire department, which arrived half an hour later. The fire was in the factory’s courtyard and both generators were completely burned, including all the fuel in the 15,000-liter tank, as well as the electrical system that connects the all pipes.

I called the Palestinian DCO, they arrived as well as the Israeli DCO and the Israeli police and a forensics team. They arrived at around noon. They didn’t give me any receipt but they said a joint Palestinian-Israeli file was opened.

The financial damage is huge, and now the factory is paralyzed.

On June 19, 2015 the police closed the investigation file due to “lack of criminal offense”.
Silence is Golden