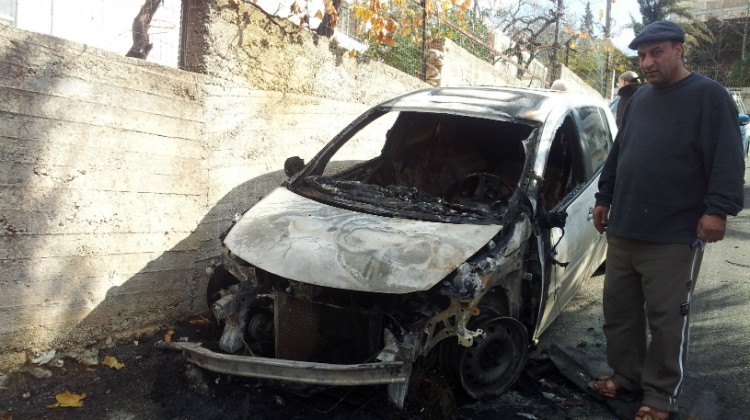 A’adel Nadi, 50, married and the father of five, Dura al-Qar’

I live in Dura al-Qar’ with my wife and five children, the youngest is two years old, we live in the village’s south-eastern neighborhood, Dahyat a-Zara’a. The neighborhood borders the settlement Beit El and our house is about 300 meters north of the settlement’s special security zone fence.

Over the past seven years the settlers of Beit El have repeatedly harassed us. During the past few years there have been five or six incidents when cars were torched and property damaged, such as shattering water heater solar panels and windows. The settlers stand by the special security zone fence and throw rocks and bottles at us in front of the soldiers. Sometimes the soldiers also shoot tear gas towards our neighborhood.

The settlement has security cameras set up along the special security zone and they probably document everything. I believe the settlement civilian security coordinator [CSC] sees everything that happens. If one our kids dares get close to the fence, they immediately call the army to drive him away.

On the night of the incident, December 31, 2013 at 3 am we heard knocking on the door. My wife opened the door and our neighbor, who is my cousin told her: “Your car is on fire.”

My wife woke me up. I immediately went out to the road and saw three cars on fire: a BMW and a Peugeot owned by my neighbors, and my 2013 Renault Cleo. My car is worth ILS 160,000.

I started shouting with all my might and neighbors came out of their houses carrying buckets of water and hoses, but the fire was too strong. The fire fighters from Bir Zeit arrived within 15 minutes and put out the fire, but the cars were burned almost completely.

After about an hour, at around 4:30, two military jeeps arrived. Soldiers photographed the cars. At 9 am, two Israeli police cars arrived together with three army jeeps. They took our testimonies and went around the neighborhood. They found footprints in the mud and photographed them.

Only later did we see the graffiti: “Regards to John Kerry”, “More to follow” and others.

Kids from the village who followed the police told me that they saw an opening in the barbed wire fence and a can of flammable fluid by it.

On January 24, 2016, over two years after the torching and spraying of slogans, the police informed Yesh Din it had closed the investigation file due to “offender unknown”.
Silence is Golden